Home › Publications › The Monitor › The No-Nonsense Guide to Equality

The No-Nonsense Guide to Equality

The No-Nonsense Guide to Equality, by Danny Dorling, published in Canada by New Internationalist Publications Ltd. and Between the Lines, Toronto and Ottawa, 2012; 176 pages, $16 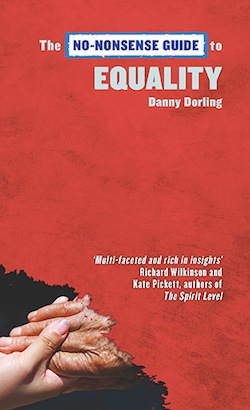 Richard Wilkinson, co-author of the celebrated book The Spirit Level, says Danny Dorling’s No-Nonsense Guide to Equality contains so many important points that you have to read it twice. It’s hard to get a better endorsement than that.

Another selling point: The No-Nonsense Guide to Equality is not much bigger than a lady’s wallet, but it contains a range of arguments for greater equality – digging all the way back to the era of hunter/gatherer societies to make the point that the history of humanity was founded on the value of equality and cooperation.

And therein lies the book’s greatest virtue. While most tomes on this subject focus on arguments against income inequality, this refreshing handbook focuses steadfastly on the case for equality, moving the discussion out of defensive mode and into a world of possibility.

It equips the reader with an interdisciplinary approach to the problem of income inequality. It sets out such a range of perspectives to consider that it stretches the imagination of the well versed and, at the same time, makes for an excellent primer.

It opens with a discussion that is boldly honest, rather than predictably earnest. Dorling ventures: “Equality matters because, when you have less of it, you have to put up with obnoxious behavior, insulting suggestions, and stupid ideas such as: “it is the ‘nature of the world’ that ‘a very small number of people’ are ‘phenomenally bright’.” Having heard one too many times the specious argument that all the world needs is more entrepreneurs like Steve Jobs to tackle income inequality (the trickle-down theory), I’m personally ready for a direct challenge to this false promise.

Dorling’s book delivers, but moves beyond critical mode. It stacks argument upon argument to build the case that greater equality is not only possible, but also highly preferable. The book’s main thesis: “[H]uman beings are happier and healthier the more equal they are, and that is borne out by looking at statistics from all over the world today.”

He documents what happens in societies when income inequalities rise: people turn to scapegoating, searching for the cause of their trouble as the politics grow more extreme.

Calling equality a process, not an end, Dorling also shows how eminently possible it is to reduce income inequalities in a hurry, if the political will is there. He does so by spanning a large swath of history and by telling success stories from across the globe.

Dorling’s book is all about how societies can work toward greater equality.

Perhaps his most compelling contribution is to re-frame equality as freedom. “Equality,” he writes, “is looking forward to the weekend. It is during the weekend that you are free to choose how to use your time and are most equal to others – and so have the fairest set of choices… Equality matters because it is freedom.”

No one, he says, goes to their death-bed regretting they didn’t work hard enough. Which leads Dorling to an anchoring thought: The best way to achieve greater equality would be to introduce a universal basic -- or citizen’s -- income. “Basic income,” he posits, “is a form of affirmative action.” It’s freedom of choice in a world whose main preoccupation today is one of austerity, restriction, a shrinking universe of possibilities for the future – the opposite of freedom.

Dorling draws on parallels in history to show that times of political austerity have been marked by instability and unrest, suggesting that could be “one possible reason why austerity measures are often avoided.”

He also delves into the history of progress to show that greater equality is typically the result of a struggle – political rebellion, revolution, social justice movements where large masses of citizens band together in common cause. It doesn’t come without a fight.

He writes: “We have to strive for greater equality endlessly, not to create a world of pure equality, but just to get our basic rights accepted as normal.”

Dorling reminds us that inequalities don’t rise and fall with business cycles; rather, they “follow political victories or failures.” He reminds us that the struggle for freedom and basic human rights is the struggle for greater equality. He reminds us, too, that each gain in greater equality, such as the women’s movement, inevitability leads to more equality for others. It has a rippling effect. One good turn begets another.

In this era of austerity, instability and unrest – where, globally, citizens are questioning the imbalance of growing income inequality – Dorling winds up with a challenge:

“Nobody,” he writes, “should seek to be part of the problem.”

(Trish Hennessy has directed the CCPA’s Growing Gap project for the past six years.)