Home › Publications › The Monitor › Peace, not pacification, in Syria

Peace, not pacification, in Syria 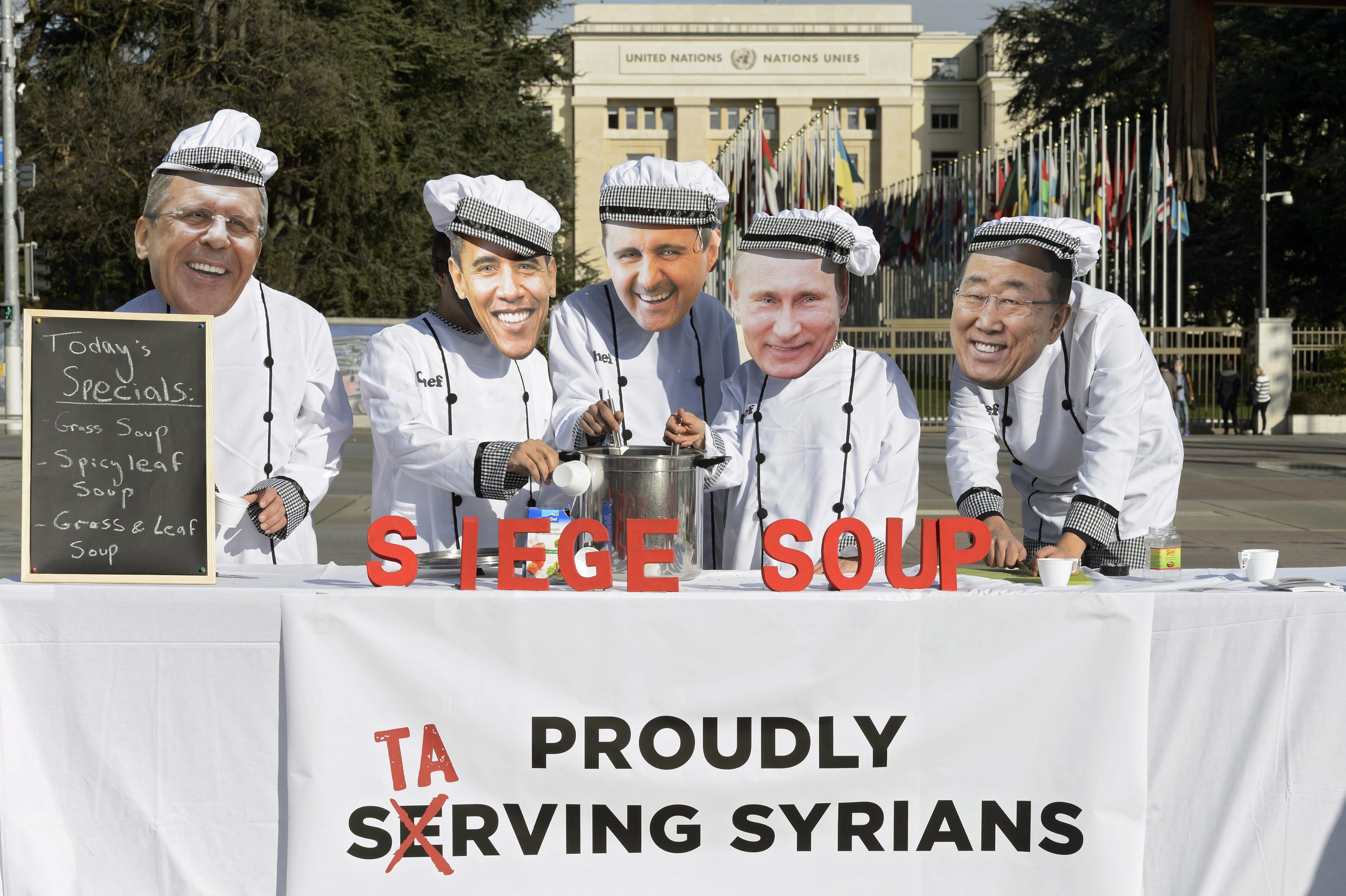 As I write, state representatives are attending the theatre in Geneva. (The talks were paused on February 3.) In Syria, meanwhile, reality prevails: in one day a tented camp of the displaced in the Latakia hills is bombed, barrel bombs rain on the south and the Damascus suburbs, Russia’s cluster bombs crumple over the north, and up to 100 people are asphyxiated by chlorine gas in Moadamiyah. Let’s hope the seats in the theatre are comfortable.

Russia, the prime mover of the process, is inviting its own “opposition” delegates. It complains (with Assad and Iran) that the actual opposition delegation contains “terrorists.” The thousands of Iranian-backed transnational Shia jihadists in Syria are not considered terrorists and should not be discussed at this stage.

The United States accepts these terms, and instead of the “transitional government” agreed upon as the ultimate goal in previous Geneva talks, it speaks now of a “national government.” In other words, Assad, who is responsible for the overwhelming number of civilian casualties and displacements, can stay so that all may confront the “greater evil” of jihadism.

Yet 80% of Russian bombs are falling not on ISIS but on the opposition to both ISIS and Assad; that is, on the communities which previously drove ISIS from their areas. A quarter of a million more people have been displaced as a result of the Russian assault, which hits courthouses, schools, hospitals and aid convoys.

The clear aim of this campaign is to annihilate the democratic-nationalist opposition so that only Assad and the jihadists remain. Then, Putin assumes, the world will have no choice but to assist him in winning the whole country back for Assad. But demographic realities will ensure that a large chunk of Syria remains forever out of Assad’s grasp.

So long as the traumatization of this scorched territory continues, so too will radicalization. Because it declares an end-times war on everyone, ISIS will eventually be defeated. But Jabhat al-Nusra (al-Qaida’s Syrian branch), or a successor organization, will inherit.

There is no real peace process. “Geneva 3” is better understood as a pacification process, as appeasement. We should at least speak honestly. Syria’s downward spiral cannot be halted until the aerial bombardment of civilian areas is stopped. This would involve robust (diplomatic, economic) argument with the Russians, something Obama has avoided over Ukraine as well as Syria. It would mean either establishing a no-fly zone, shooting down whatever planes bomb civilians, or allowing the currently defenceless opposition access to anti-aircraft weapons.

Once the bombing stops, and sieges are lifted, the displaced can return and economic and social life can be revived. Space will grow for democratic activism even as it shrinks for jihadism. And then a genuine settlement process could begin. What might that look like?

The opposition’s High Negotiations Committee came out of a meeting in Saudi Arabia that brought together the National Co-ordination Committee (a Damascus-based body semi-tolerated by the regime), the Istanbul-based Coalition, and the leaders of democratic-nationalist (Free Army) and nationalist-Islamist militias. The latter included, at the more extreme end, Jaysh al-Islam, and Ahrar al-Sham, Salafist Syrian pragmatists who must be involved in a final settlement, as must regime-loyalist Alawi communities, lest they act as spoilers.

Jaysh al-Islam, the dominant militia in the eastern Ghouta, is probably responsible for the abduction of the revolutionary activists known as the Douma Four, including Razan Zaitouneh, a human rights lawyer and founder of the Local Co-ordination Committees. My book with Leila al-Shami, Burning Country: Syrians in Revolution and War, is dedicated to Razan, a woman of fearless principle whose fate in some way is emblematic of Syria’s. Worse, Jaysh al-Islam’s leaders have sometimes made sectarian threats that wound the revolution by further alienating minority groups. Its position on democracy as a desired end is ambiguous at best.

For these reasons civil revolutionaries often find themselves opposing Jaysh al-Islam’s authoritarianism while at the same time insisting that it be recognized as part of the revolution and part of the settlement. Despite its abuses, the militia is subject to popular pressure. Its assaults on activists are exceptions, therefore, whereas in Assad or ISIS areas they are the rule. Free elections have been held in Jaysh al-Islam territory. And Jaysh al-Islam has been the most effective opponent of ISIS in the Damascus region.

Ahrar al-Sham pulled out of the Saudi meeting complaining that the conference did not recognize Syria’s “Muslim identity” and gave too much representation to the National Co-ordination Committee, which is not really a revolutionary body. Difficult though it is, it is important to try to bring such groups into the political process and to distance them from Jabhat al-Nusra, Syria’s al-Qaida, with whom they sometimes collaborate on the battlefield.

If Syria is to survive, the fighting men of the nationalist and Islamist opposition must merge with whatever remains of the post-regime Syrian army to take on ISIS, Nusra and other transnational jihadists (including the Shia ones). But for this to happen, the immediate threat of Assad’s scorched-earth policy must be lifted.

Even as they execute their own opposition clerics and endlessly bomb Yemen, the Saudis should be congratulated for bringing together a broad spectrum of the Syrian Arab opposition. If current circumstances change so that a real peace process becomes viable, the High Negotiations Committee could perhaps form a credible negotiating team to sit down with the PYD (the dominant party/militia in Syria’s Kurdish areas) and representatives of pro-regime communities.

The Saudi recipe, however, misses a vital ingredient—the local councils, sometimes called revolutionary councils, which have been established throughout the country. These are practical, not ideological organizations. Their members are civil activists, family and tribal leaders, and people selected for technical or professional skills. They do their best in the very worst conditions to provide humanitarian aid and fulfil basic needs where the state has either collapsed or deliberately withheld them, including water, electricity, waste disposal and health care.

The idea started with activist Omar Aziz, who wrote an influential paper on self-organization in the revolution’s eighth month. Aziz was an anarchist who believed that protesting the regime by itself was useless if revolutionaries did not build alternatives to repressive state structures. He advocated forming councils as grassroots community forums, and helped set up the councils in Barzeh and Zabadani before his arrest and then death in prison in February 2013.

Council members are appointed by some form of democratic process, though the form differs from place to place, and is most severely restricted in regime- or ISIS-controlled areas where the councils must operate in secret.

Aziz Asaad, one activist we interviewed for our book, described the challenges this way:

It was difficult for us—particularly in the middle of a revolution calling for pluralism and democracy—to select revolutionary representatives by democratic process.... It was made worse by the fact that we were in a regime-controlled area and so constantly feared arrest. When we formed the local council in Salamiyah we adopted what you could call ‘the democracy of the revolutionary elite.’ In secret we chose 11 people from about 55.”

In the rebel-held “liberated” areas, however, the councils are selected by democratic ballot—the first free elections in Syria in over four decades. In recent elections in the Ghouta, militia leaders were not allowed to stand. Fighters were, but none were elected. In recent months, provincial elections have been held in the Daraa region, too, where the Free Army’s Southern Front holds sway.

It is a sad irony (and one reason why we wrote our book) that the previous decade’s invasion of Iraq was supposedly done for the sake of democracy, yet almost nobody in the West today is aware of the Syrian people’s self-organized experiments in democracy. The western public, failed by journalism, are more likely to question Arabs’ capacity for democracy than to marvel at the Syrian achievement under full-scale military assault.

The councils are not always perfect. Sometimes they are rendered dysfunctional by factionalism or intimidated by warlords. But they are the closest thing we have to true representatives of the Syrian people, and they should therefore be strongly present at any meeting discussing Syria’s fate.

If world powers are genuinely interested in moving the region away from war and jihadism and toward peace and democracy they should support the councils more powerfully than they are already doing. Financial support is not enough; there’s no point gifting new rubbish-collection trucks if they will be bombed in their first week. At the same time, Syrian oppositional elites and militias should be encouraged to recognize the central democratic achievement of the local councils, and thereby to develop a decentralized vision of the future.

The myth that a strong central state ensures the strength and dignity of its people runs deep in oppositional consciousness—nationalist, leftist and Islamist—despite all the evidence to the contrary. But decentralization is the best way to deal with Syria’s currently explosive ethnic and sectarian polarizations. It would mean a recognition of autonomy for the Kurds, who have set up their own council system. It would also mean that different areas could govern themselves according to their social and sectarian composition. So alcohol, for instance, may be banned by one council but permitted by another.

The alternative to decentralization is partition, which in any case is the natural end to Putin’s bombardment. Partition means greater ethnic cleansing than yet seen. It means the permanence of refugee camps. It means an Assadist rump on the Mediterranean coast to be squabbled over by Iran and Russia, and a vengeful, burnt Sunni territory cut off from the sea. It would be a disaster for the Syrian people, and for global security too.

Robin Yassin-Kassab is the author of the novel The Road from Damascus and the co-author, with Leila al-Shami, of a new book on the Syrian revolution and war, Burning Country (Pluto, January 2016). He co-edits www.pulsemedia.org and blogs at www.qunfuz.com.

This article was published in the March/April 2016 issue of The Monitor. Click here for more or to download the whole issue.