Home › Publications › The Monitor › Policing of dissent, from the G20 to the Wet’suwet’en dispute

Policing of dissent, from the G20 to the Wet’suwet’en dispute 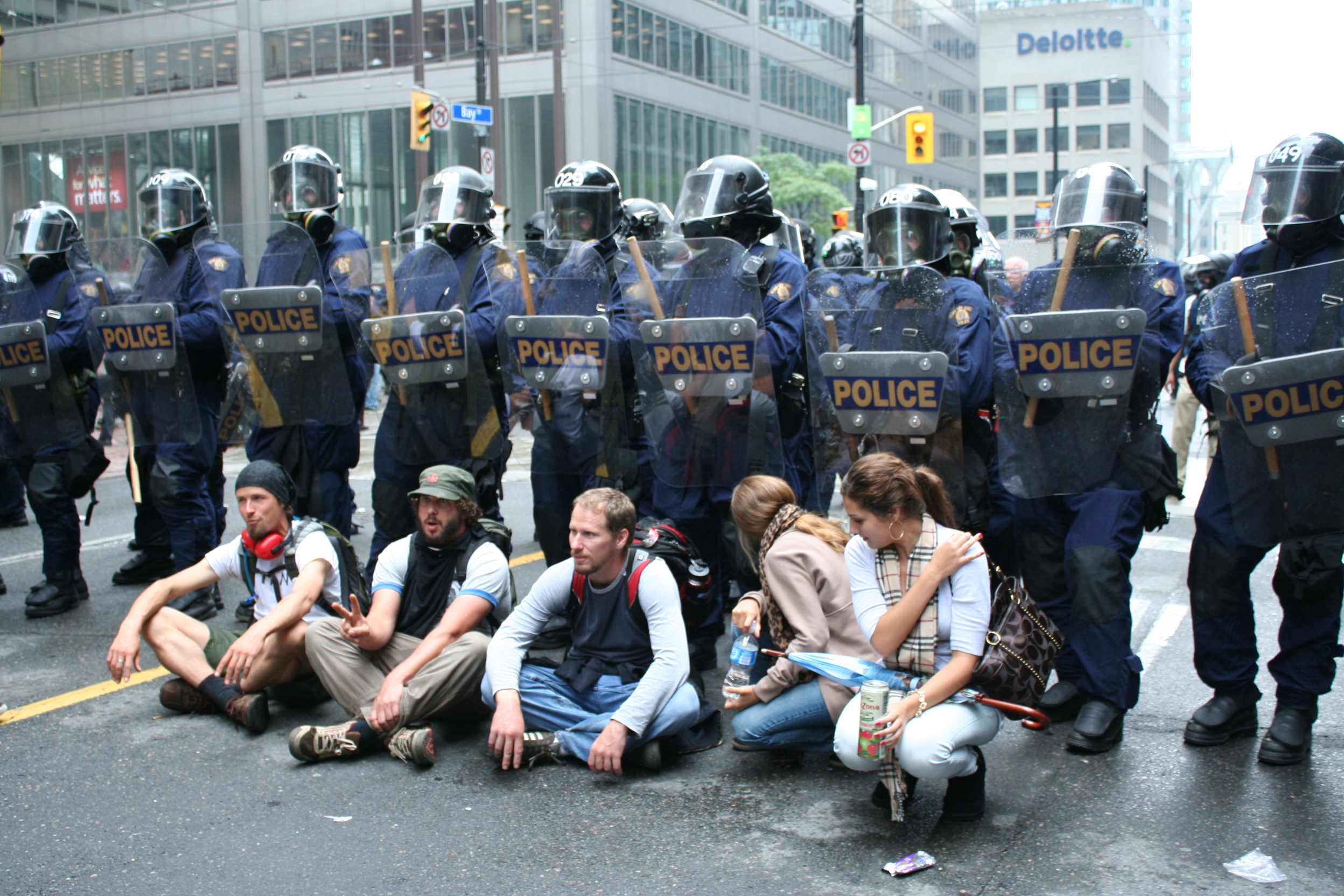 Hours before the police went berserk, my friends and I joined the throng of liked-minded protesters, including whole families, marching through the heart of downtown Toronto. It was a Saturday, June 26, 2010. Our destination was as close as we could get to the Metro Toronto Convention Centre, venue for the fourth annual G20 leaders’ summit, hosted that year by then–prime minister Stephen Harper.

As we wound our way through the streets, we ran into other protesters we knew, including the young son of a friend, who had come all the way from Halifax. People were drawn from across Canada and many other parts of the world to this highly publicized political manifestation. Their demands of world leaders, in the trough of the global financial crisis, were varied but also consistent with past mass mobilizations against corporate globalization: put people and the planet ahead of the profits of the elite.

What most people (inside and outside the GTA) will remember about that moment, however, is the property damage and overblown police response to it. Sure, Black Bloc protesters could be spotted among the crowd. But it was impossible to miss the more intimidating army of riot police showing off their new “assets” (see “Harper’s Security Spending Spree” on adjacent page), as one observer later put it.

A few hours into the march, police locked down the city’s core. Hundreds of demonstrators, but also many hapless observers, would eventually be arrested—even many in a “designated protest zone” established by the police on the lawn of Queen’s Park, about 15 blocks from where G20 leaders were meeting. At least 100 officers illegally removed their badges during the mayhem, and a total of 1,100 protesters were charged, making it the largest single mass arrest in Canada’s history.

Toronto’s police chief at the time, Bill Blair (now federal public safety minister), who was then regarded as a police reformer, defended the behaviour of the officers on duty, as did the city’s mayor, David Miller. Yet Blair “never called the shots,” according to the former general counsel for the Canadian Civil Liberties Association, Nathalie Des Rosiers. Because this was an international event on Canadian soil and involving the prime minister, that was the RCMP’s job.

According to Des Rosiers, who sat as a Liberal in the Ontario legislature from 2016 to 2019, the only way to understand the police behaviour in Toronto in June 2010 is to examine the agenda and priorities of the Harper government. Many other observers point out how politics and policing remain dangerously entwined a decade later, with consequences for social movements and the civil liberties of everyone.

As the chair of the Toronto Police Services Board in 2010, Alok Mukherjee has a unique perspective on the events of a decade ago. In contrast with Blair or Miller, he eventually apologized for what had happened. "Innocent people had their rights abridged, their liberty interfered with and their physical safety jeopardized," said Mukherjee in a prepared statement in July 2012.

Now a commentator and writer on policing, Mukherjee claims that the G20 was a dangerous example of how the post-9/11 national security framework had produced a newly aggressive policing that was reflected in uniforms and vehicles, surveillance practices, weaponry and tactics.

“Policing driven by national security and anti-terrorism operations…treats the community—or segments of it—as ‘the other’ and a legitimate target of surveillance and intelligence gathering,” he wrote in his 2018 book, Excessive Force: Toronto’s Fight to Reform City Policing.

Much of this shift occurred under earlier Liberal governments attempting to integrate Canada’s response to the 9/11 terrorist attacks with the neoconservative government in Washington, D.C. But over a decade in office, the Harper government displayed an overtly harsh tone toward their self-declared enemies: anti-globalization activists and environmentalists were directly targeted, while Muslims and Indigenous people felt even more scrutinized and criminalized.

The Harper government (then in minority) did its best to stifle a House of Commons investigation of the G20 protest policing. Still, the March 2011 report of the public safety committee was critical of police behaviour and requested an apology to the thousands of people whose rights had been violated.

In a dissenting rejoinder, Conservatives on the committee praised “the good work done by Canadian law enforcement officers” and suggested the criticism of the police was “merely an attempt by the Opposition Coalition to score political points.” But according to a CBC News report later that year, this “good work” included an extensive 500-person security and intelligence operation ahead of the G8 and G20 that targeted and infiltrated activist groups across Canada in collaboration with private corporations, including “energy sector stakeholders.”

This public-private collaboration continued into the Harper government’s majority years. Two years after the G20 in Toronto, Joe Oliver, then natural resources minister, penned an open letter during the National Energy Board hearings into the Northern Gateway pipeline, in which he condemned “foreign special interest groups” for interfering in Canada’s affairs. “These groups threaten to hijack our regulatory system to achieve their radical ideological agenda,” the minister said. “They seek to exploit any loophole they can find, stacking public hearings with bodies to ensure that delays kill good projects.”

In 2015, the government passed a broad package of security measures in its Anti-Terrorism Act (Bill C-51), which expanded the definition of national security threats to include those posing a danger to Canada’s “critical infrastructure” (e.g., bridges, highways, mines, and oil and gas projects such as pipelines and resource extraction). As sanctions for interfering with these projects increased, environmental protections were weakened. Charitable groups promoting a low-carbon future, or whose views otherwise challenged the government, were targeted for political audits by the Canada Revenue Agency.

With C-51 in place, Indigenous rights and land claims activists and environmentalists could now be labelled, under the loose definition of national security, as “radicals” or “terrorists,” with the likelihood this would increase surveillance and harassment by the RCMP and the Canadian Security Intelligence Service, said Tim McSorley, national co-ordinator of the Ottawa-based International Civil Liberties Monitoring Group.

Bill C-51 also introduced the Security of Canada Information Sharing Act, which for the first time removed internal barriers to the sharing of a citizen’s personal information among federal government departments or agencies if the data is considered relevant for an investigation.

“If the Canada Revenue Agency thinks it has information that could be relevant to the RCMP around some kind of information about protesters, they could in theory offer to share that information,” says McSorley.

After winning the fall 2015 federal election, the new Liberal government promised to reform the highly controversial and much hated Bill C-51. In 2017, the government introduced more changes to Canada’s national security practices in Bill C-59, which underwent another public consultation and became law in June 2019.

“There was less inflammatory rhetoric” from the Liberals toward protesters, said McSorley. But both the critical infrastructure and sharing of citizen data provisions (the latter under a slightly new name) were largely kept intact, as were new powers given to CSIS in Bill C-51 to disrupt activist groups.

Of special interest to the Mounties were 313 core Indigenous activists identified by the force in its Project Sikta, 89 of whom the force said met “the criteria for criminality associated to public order events,” even though investigators were unable to find anything violent about the organizations monitored. 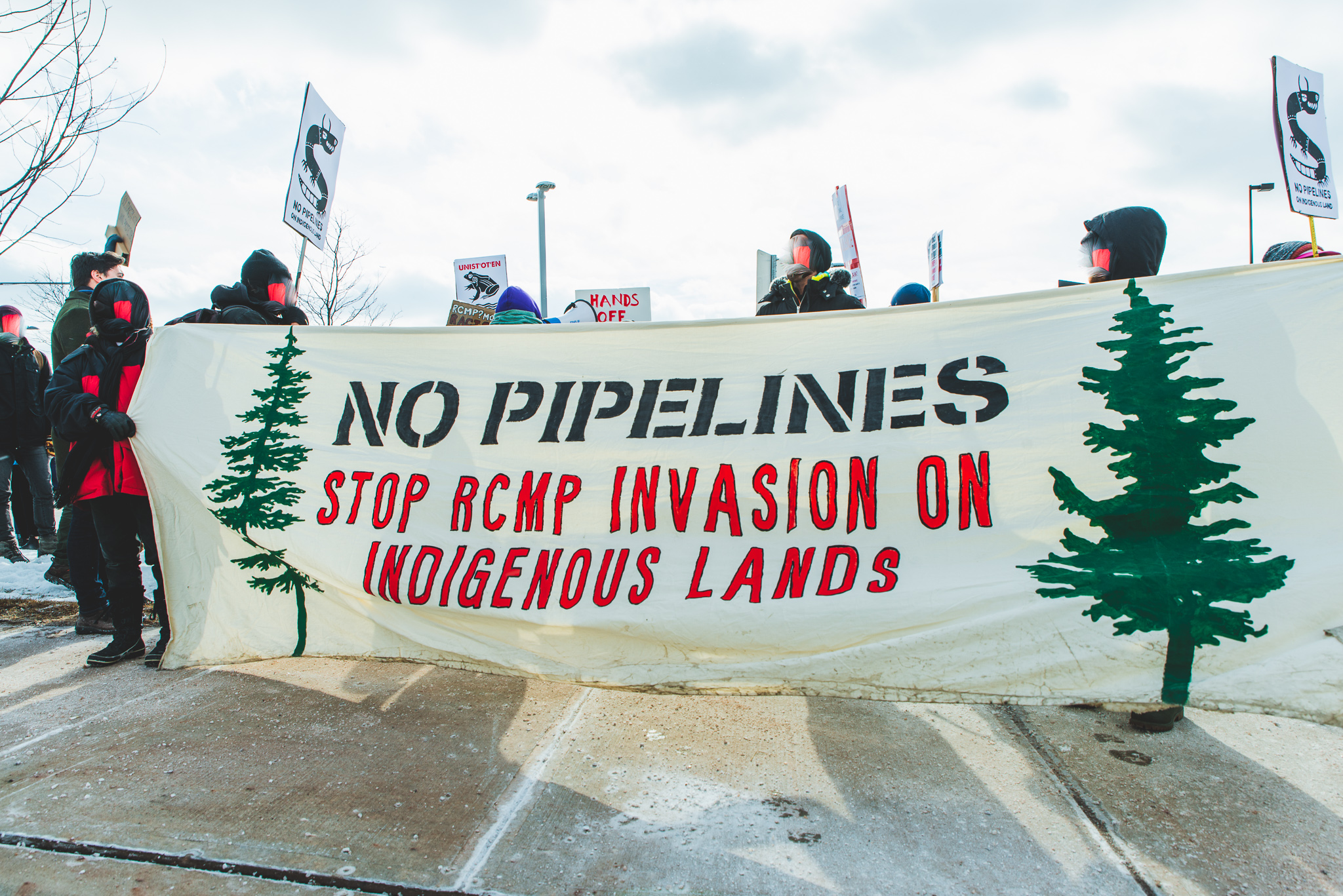 In late February this year, a few weeks before COVID-19 forced everyone indoors, nationwide protests by Indigenous and non-Indigenous supporters of hereditary Wet’suwet’en chiefs had brought rail traffic to a halt in much of the country. The tactic was meant to put pressure on the federal and B.C. governments to come to a mutually acceptable agreement with the Wet’suwet’en following the violent enforcement, in early February, of a Coastal GasLink injunction against camps standing in the way of the company’s pipeline workers.

The RCMP officers had come equipped with helicopters and armed paramilitary personnel to confront unarmed men, women and children defying the injunction, recalled Grand Chief Stewart Philip of the Union of B.C. Indian Chiefs. He told CBC’s Michael Enright that the Mounties looked a bit like U.S. GIs in the Vietnam War, showing off their firepower.

Fortunately, no one was shot or wounded by the RCMP. But rights were violated, including those of supporters of the hereditary chiefs who were arrested on unceded Wet’suwet’en territory, and those of journalists covering the events.

Melissa Cox, a U.S. documentary filmmaker, said she was roughed up a bit while filming the arrest of Gitxan hereditary chief and matriarch Gwinintxw (Yvonne Lattie).* “The police officers applied multiple painful pressure points on my left arm as they pulled it behind me, while simultaneously using force to rip the camera from my right hand,” she said.

Cox was not formally charged and said she is currently “weighing my options” as to whether to sue the RCMP. “One of the conditions of my release is, ‘keep 10 meters off any CN property or work site except as required in the normal and ordinary course of travel.’ On legal advice, I intend to continue reporting on protests at rail sites.”

Cara Zwibel, a spokesperson for the Canadian Civil Liberties Association, said the filming of an arrest does not constitute obstruction in Canadian law and therefore should have been allowed by the RCMP. Meanwhile, Karyn Pugliese, president of the Canadian Association of Journalists, stated it is important that reporters are able to monitor and cover the “behaviour” of police because of their bad history with the Indigenous population.

Formerly the executive director of news and current affairs at the Aboriginal Peoples Television Network (APTN), Pugliese said the shooting and killing of an unarmed Ojibway man, Dudley George, by the Ontario Provincial Police at Ipperwash in 1995 might not have happened if the media had been present.

A similar tragedy was avoided during the rail blockades that ended in March. The federal government resisted calls by the Official Opposition to send in the RCMP and other provincial police forces to arrest the “radicals,” and eventually reached a tentative settlement with the hereditary chiefs.

From the Toronto G20 to the events in B.C., we are encountering what security historians call “political policing.” But while Toronto Police got a slap on the wrist for the G20 work, and CSIS has occasionally been sanctioned for its racial targeting of Muslims since 9/11, the Mounties are still given a free pass for their past and present abuses. According to Monaghan, it’s long past time to scale back Canada’s “racist” and “rogue” national security state, and to hold those who built and maintain it accountable.

* This article was updated on May 6 to correct the fact that Gwinintxw is a Gitxan hereditary chief and matriarch.

Paul Weinberg is a freelance journalist and the recent author of When Poverty Mattered: Then and Now (Fernwood).