The promise and challenges of growing the Indigenous vote 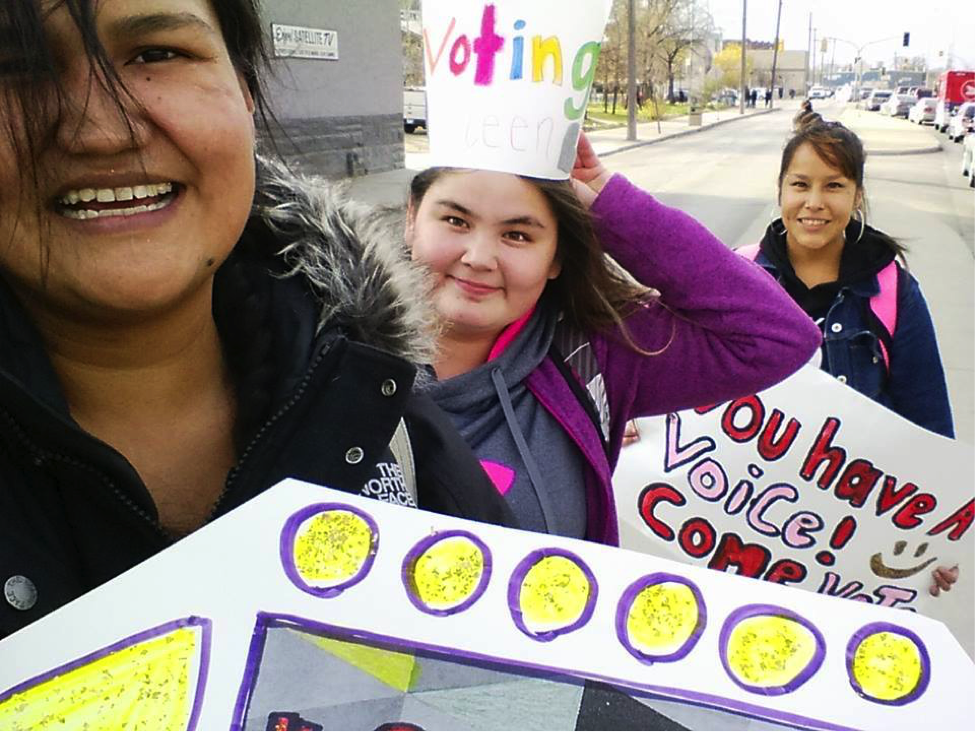 October 22, 2014. Municipal election night in Manitoba. Indigenous voters are posting to the Winnipeg Indigenous Rock the Vote (WIRTV) Facebook page. One woman says she got out to vote despite the pain, still healing, of a past beating by police officers. There are lots of selfies of jubilant parents and children at the polls. One young woman came out because her sister is one of the missing Indigenous women and a First Nations mayoral candidate had announced he had an action plan.

The reason most first-time Indigenous voters gave for participating in the election was that they had a choice that included Indigenous candidates with a platform that addresses issues of interest to Indigenous people. No one in the Winnipeg municipal election ran under a formal political party affiliation. They built a platform based on their supporters’ interests. It’s different at the provincial and federal levels, where Indigenous candidates vying for office carry the banners of one or another major political party, with the inertia that creates.

Some choose not to participate in Canadian politics due to a lack of meaningful Indigenous contributions to the Canadian political system and party politics. Indigenous candidates are fine, but how effective can they be, some say, in a system that does not work for Indigenous people? It’s a good question. Canada’s Anti-Terrorism Act 2015 (Bill C-51) is a case in point. Would a party that understands the historical and contemporary place and rights of Indigenous Canadians have drafted a security bill in such a way that views our interests first as a threat to domestic security?

Some Indigenous people wonder if a federal pan-Indigenous party is the way to bring Indigenous perspectives to Canadian politics. Such a party could play a role in keeping issues widely thought of as “Indigenous” in a prominent place on the political stage. These issues include access to safe drinking water on First Nation reserves, a federal inquiry on missing and murdered Indigenous women, equitable health and education funding for residents of First Nations, the implementation of the United Nations Declaration on the Rights of Indigenous Peoples, and the adoption of the Truth and Reconciliation Commission recommendations.

Canada’s Indigenous people are diverse and so are our interests. Some of those issues (jobs, taxes, national child care) might be addressed by the major political parties as they are for other Canadians. We, like other Canadians, are concerned about climate change and the protection of waterways. WIRTV co-founder Sylvia Boudreau led a forum on Indigenous issues for mayoral candidates in our last municipal election. Certainly, our members would welcome a similarly focused forum in the upcoming federal election.

The self-exclusion of some Indigenous nations from Canada’s national elections, as an affirmation of sovereignty, is a frequently discussed issue, but one that does not really come up in WIRTV circles. There is no denying that the federal government is required, in Canadian law and through its negotiated legal contracts with Indigenous nations, to provide municipal and social services, goods and transfer payments to Indigenous nations. Yet the reality is that these obligations are not rendered so easily. The federal government has the most influence of any government on the day-to-day lives of First Nation reserve residents. If for only this reason, the participation of Indigenous people in federal elections is of paramount importance.

Winnipeg Indigenous Rock the Vote is the brainchild of Jackie Traverse, a Cree artist and human rights activist. Founded in the fall of 2014, the campaign’s main goal was, at first, to prevent a particular mayoral candidate from winning office. He had advocated for policies that discriminated against Indigenous and homeless people. That candidate came in fourth in the local election, behind two Indigenous people. Race is perhaps not as prominent an issue in the October federal election, but the effect poverty has on Indigenous voting is just as evident.

Although there is a growing middle class of Indigenous people in Winnipeg, a disproportionate number of Aboriginal people are still living on low incomes. And people in poverty are less likely to vote. Why? Because they are always working to meet their basic needs: food, shelter, safety.  Navigating the rules, systems and bureaucracies of accessing identification, and meeting voting rules takes time, energy and money.

By far, the issue that came up most often during the Winnipeg election was access to proper voting identification. Many low-income people cannot afford proper ID, or they move around so often it is a hassle to maintain an ID with the correct address. In addition, Indigenous people are far more likely to not have a fixed address due to movement between reserves and rural communities to stay at the homes of relatives and friends in urban areas.

Access to voting has been given a prominent place in this year’s federal election, with a new law that offends the democratic tenet of franchise to such an extent that some Canadians are challenging it in court.

The Fair Elections Act, enacted last year despite protests from almost all experts on the electoral process, has created barriers to voting for all Canadians, but most of all for the young (students), homeless, poor, immigrants and Indigenous people. For instance, the voter registration card, sent by Elections Canada to the home address of registered voters, was used by 400,000 people as a piece of identification in the last federal election. This will not be an option in the October election.

First, there is the replacement of vouching for another’s identity at the polls with the new “attestation” system. Whereas one registered voter with proper identification used to be able to vouch for many others without ID, they can now only attest for one other person. This ends the practice of having a Chief vouch for the residency of multiple resident members from her First Nation reserve.

Second, the new requirement for First Nation reserve residents, that they have their Indian band administrator complete a “Confirmation of Residence” letter to use as identification, creates burdensome and unnecessary hurdles to voting. For the rest of Canadians, a driver’s license is the only ID required to register or vote. Our experience so far in registering voters is that even those First Nation residents with a driver’s license are not being permitted to register.

Some polls have shown that a strong Indigenous turnout at the polls this election could make a big difference in the results. Winnipeg Indigenous Rock the Vote has been helping with voter registration and providing ID clinics, and there are several other Indigenous voting groups promoting registration and voting in the upcoming federal election. All of us hope for a turning of the tide. If it can work in one city, there’s no reason it can’t work across Canada.

Lisa Forbes is a volunteer voting educator with Winnipeg Indigenous Rock the Vote.