Home › Publications › The Monitor › Reconciling in the Apocalypse

Reconciling in the Apocalypse 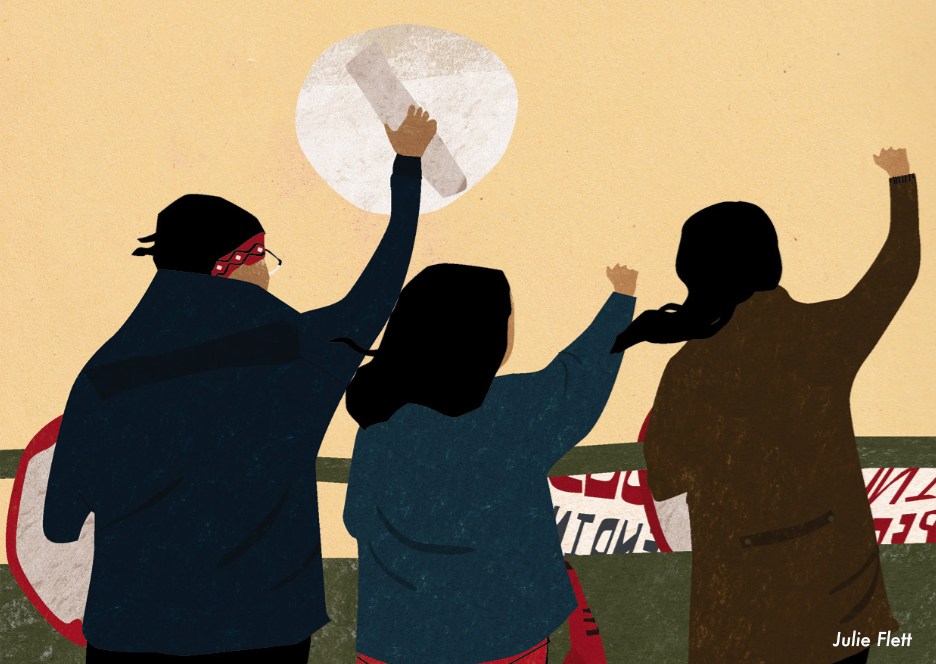 Discussions about reconciliation are often exhausting, because it’s not my story or the story of my people.

I am writing this from Kisiskâciwan (Saskatchewan), which became the centre of national attention in January 2016 for the school shooting at La Loche, a northern Métis and Dene community of about 2,600 people.

With the release last year of the Truth and Reconciliation Commission report on residential schools, the idea of “reconciliation” is still fresh on the tips of Canadian tongues, though it seems few have an understanding of what it means to practice reconciliation in the face of ongoing colonialism.

As each decade passes, the number of people who will advocate for outright genocide of Indigenous peoples decreases. However, we aren’t past the stage where Canada’s biggest magazines will still pay for regurgitated ideas of reserves and Northern communities like La Loche as “doomed,” and of Indigenous peoples as inherently “tragic,” disregarding the theft and dispossession preceding these labels. By some of the nation’s most progressive, we are looked down upon with a sense of pity, as if reconciliation means it is the duty of Canadians to learn to be kind to Indigenous people.

But it seems that with any idea of reconciliation I’ve heard, there is an unspoken requirement of Indigenous forgiveness and Indigenous consent to continued occupation. Even within our own communities, the onus is on women, Two-Spirit people, and children to forgive those who have harmed us. Healing, we are told, cannot begin to happen until we forgive colonial sins of the past.

The real task of reconciliation, however, is not in Canada waiting around to be forgiven for colonialism so business can carry on as usual; it is for Canadians to end the ongoing colonial violence that still suffocates Indigenous lives.

At a gathering this summer at historic Gabriel’s Crossing, Métis elder Maria Campbell told us the job of writers and artists is to be mirrors for the people; that “we build what could’ve been, what should’ve been.” In knowing the histories of our relations and of this land, we find the knowledge to recreate all that our worlds would’ve been if not for the interruption of colonization.

Far from being tragic or doomed, as Indigenous communities we are working toward our futures daily; we are working toward futures that Canada tried endlessly to curtail, control and eliminate entirely. Thanks to the work of generations, Indigenous futures have never been so clear and bright. Indigenous futures look like the resurgence of our languages, our knowledges, our governance systems, and journeys home to our traditional territories.

A key requirement for any of these futures to exist is a healthy world capable of sustaining our futures. When the idea of traditional Indigenous knowledges is raised, Canadian political theorists will roll their eyes as if the idea of “living in harmony with nature” is something cliché, stereotypical and naive. On the contrary, to return to the lands of our ancestors is the most radical and revolutionary practice of all.

Unfortunately, Indigenous people are no longer the only ones responsible for the well-being of this land. This is where reconciliation really matters.

Canada on the world stage

I was part of the Canadian Youth Delegation to Paris for the COP 21 climate conference. This conference was touted as a significant moment for climate justice and a turning point for an unsustainable system on the verge of collapse.

While in Paris, the Canadian Youth Delegation met with Environment Minister Catherine McKenna in December 2015. We were told the federal government’s responsibility was to welcome Enbridge, Suncor and other mining companies to the table with Canadians and Indigenous people, to discuss a climate solution that would work for us all. To appeal to the youth, there was even a Twitter hashtag: #AllInThisTogether.

A classic case of worldviews colliding: as Indigenous people, we will never be able to sit at a table with mining companies and reconcile. No person can sit at a table and claim to give consent to fracking, mines or pipelines on behalf of the lands, waters and more-than-human lives that make up Indigenous territories.

Reconciliation is about Indigenous liberation, and it is about the liberation of the earth. We are never “all in this together” while Indigenous communities are stripped to the bone for the fat to maintain Canada.

Reconciliation is no more Indigenous kids dropping out of university because they can’t afford it. It is Canadian courts ceasing to prosecute Indigenous land defenders for shutting down pipelines on our own territories. It is all missing Indigenous women and girls returned home.

Reconciliation is recognizing that migrant lives are worth more than borders. It is opportunities to learn Indigenous languages.

Reconciliation is funding that reflects the amount of reparations owed by governments, and the abolition of colonial systems of policing. It is mining corporations shutting their doors and paying every last cent of their worth into rebuilding devastated habitats.

Reconciliation is the realization of worlds that should have been.

Sitting in a boardroom, these things might seem irrational or impossible, but on the land, we recognize these visions as vital to the survival of our worlds. After all: this is how Indigenous communities operated for centuries before colonization

A living example of reconciliation is Idle No More’s One House, Many Nations project. In collaboration with Mini Homes of Manitoba, Idle No More volunteers (Indigenous and settlers alike) are building fully self-sustainable mini homes as a hands-on response to deplorable housing conditions imposed on First Nations communities. The very first Idle No More mini home was placed in Big River First Nation this January. With tens of thousands needing safe housing in this country, the reality is we don’t have time to wait for the duty or kindness of politicians while our people are homeless.

Home by home, we are rebuilding nations.

Do you know how many Indigenous languages have been nearly extinct?

Word by word, we speak languages back into existence.

Do you know how many times Indigenous worlds have been “doomed”?

Relation by relation, we dream worlds back into existence.

Anishinaabe scholar Lawrence Gross writes about “Post Apocalypse Stress Syndrome,” acknowledging that Indigenous people have already lived through multiple attempts at our mass destruction. As Gross writes, “the Anishinaabe have seen the end of our world,” and we have lived through it, returning stronger than ever.

If duty or kindness alone aren’t enough to propel you to care about the necessity of reparations to Indigenous people, consider at the very least that you will need a friend who knows how to skin a porcupine, build a house, and navigate by the stars when the end of your world comes.

After the shooting in La Loche, Canadian flags are flown at half-mast as a sign of mourning for lives lost to the ongoing violence of colonialism. Perhaps a move to reconciliation, then, requires lowering the flag entirely.

Erica Violet Lee is an undergraduate student at the University of Saskatchewan in her final year of a philosophy and political studies degree. She is an activist and organizer with Idle No More and the #ReadTheTRCReport project, and was part of the Canadian Youth Delegation to the COP 21 meeting in Paris this December. She writes about her experiences as a young Nehiyaw student navigating the worlds of academia on her Moontime Warrior blog.

This article was published in the March/April 2016 issue of The Monitor. Click here for more or to download the whole issue.