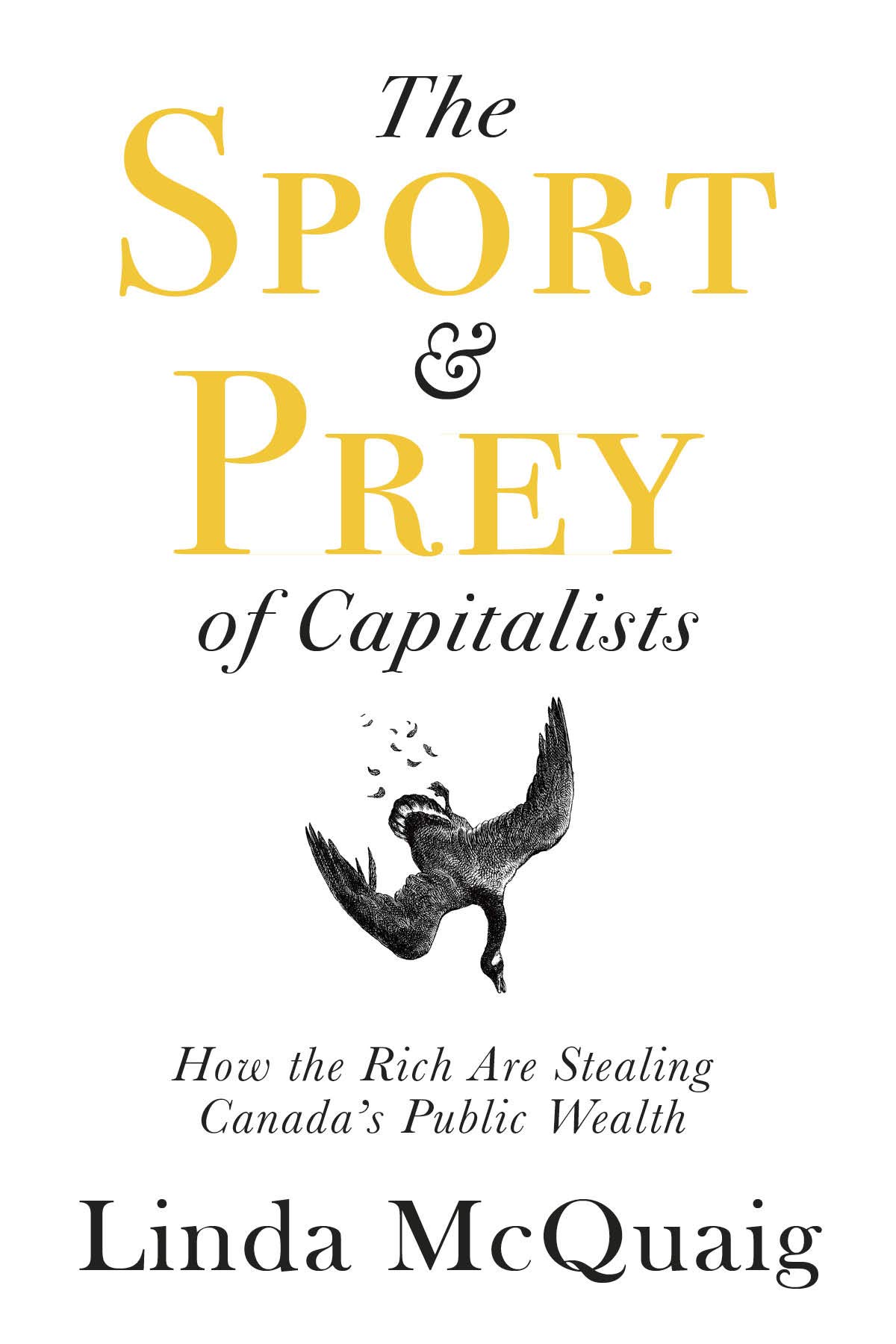 The Sport and Prey of Capitalists: How the Rich Are Stealing Canada’s Public Wealth
Linda McQuaig
Dundurn, August 2019, $28.99

As it turns out, Canadians are rather good at public enterprise. McQuaig turns to historians such as H.V. Nelles to explain this. He argued this tradition was a response to our unique political economy, an assertion of independence from our huge southern neighbour, and a corrective to the narrow-minded conservatism of Canada’s business elites.

The book recounts the creation of public electricity in Ontario in the early 20th century; the development of insulin, vaccines and other life-saving medicines in publicly owned labs; the building of the Canadian National Railway, which in turn spurred the rise of public broadcasting; and the remarkable success and popularity of public banking in the post-Confederation period.

Recovering this historical memory is far from a purely academic exercise. McQuaig convincingly argues that public enterprise, which has been unremittingly disparaged and dismantled over the last half century, is the best option to rebuild Canada’s decaying infrastructure, meet social needs such as those of the unbanked, confront the impending climate emergency, and more.

The book revisits the regrettably thwarted efforts of Peter Lougheed, Trudeau the elder and, much later, former Newfoundland and Labrador premier Danny Williams to challenge control of the oil sector by foreign multinationals and win greater public benefits from this publicly owned resource. She contrasts the precarious state of public finances in free-enterprise Alberta with Norway, which pioneered a state-led approach and has amassed an impressive rainy-day fund for when the oil inevitably stops flowing.

By reclaiming the past, McQuaig illuminates the persisting advantages of public enterprise. Foremost among these are the ability to pursue the common good, and the capacity to think long-term and meet those needs (such as developing medicines for rare diseases) spurned or exploited by the private sector. Other advantages include not needing to turn a profit, the financial stability and attractive financing imparted by government backing, and, not least, the ability to attract talented innovators and dedicated workers motivated by the call to public service.

McQuaig stresses that the creation of public enterprise involved not only vision but political struggle. From publicly owned hydroelectricity to medicare, public enterprise has been fiercely resisted by entrenched commercial interests.

She also debunks the myths that under free-market capitalism the state simply sits on the sidelines as a neutral arbiter. The liberal state is interventionist, but typically to support its friends in the corporate sector.

For example, in an effort to staunch the rising tide of support for publicly owned electricity in Ontario, then­–premier George William Ross amended the Municipal Act to prevent local governments from competing with private utilities. His obstructionism led to him being thrown out of office in 1905, clearing the way for the province’s rapid electrification under public ownership.

Catchy slogans, like former Alberta premier Ralph Klein’s “get government out of the business of business,” mask a cozy and collaborative relationship between supposedly free-enterprise governments and the private sector. Public revenues are foregone or channelled in support of private profit. Public protections are weakened under the banner of reducing red tape.

Today, as McQuaig deftly explains, the Trudeau government has twisted the sensible idea of a public infrastructure bank into what amounts to a giant slush fund for its pals in the private sector, such as private equity mogul Larry Fink, whose BlackRock minions were even invited to help federal officials draw up plans for the bank.

Anyone who doubts the perils and pitfalls of the private-equity approach should read McQuaig’s chapter, “The worst deal of the century,” on Ontario’s Highway 407 privatization boondoggle. This deal has cost the Ontario public tens of billions of dollars in foregone revenues and left a vital provincial transportation artery under private, foreign control.

On the other hand, once they are established, public enterprises are typically so successful that they command strong support both from the public and even parts of the business community. That makes them hard to dislodge, even when facing strong corporate opposition.

In the face of climate change, rising inequality and populist disenchantment, the case for public enterprise is today as compelling as ever. McQuaig lays out an inspiring array of possibilities, including publicly researching and manufacturing medicines, creating a postal banking service, and manufacturing electric buses and vehicles by taking over Oshawa’s world class facility left idle by corporate outsourcing.

This is an important book. McQuaig makes a convincing case for the revitalization of public enterprise. By doing so, we can tap into our traditions, expose and outsmart elites clinging to their privileges, and unleash our inherent instincts to serve our communities and the public good.

Scott Sinclair is Director of the CCPA's Trade and Investment Research Project.