Home › Publications › The Monitor › There is a way to control arms exports, but does Canada have the will?

There is a way to control arms exports, but does Canada have the will? 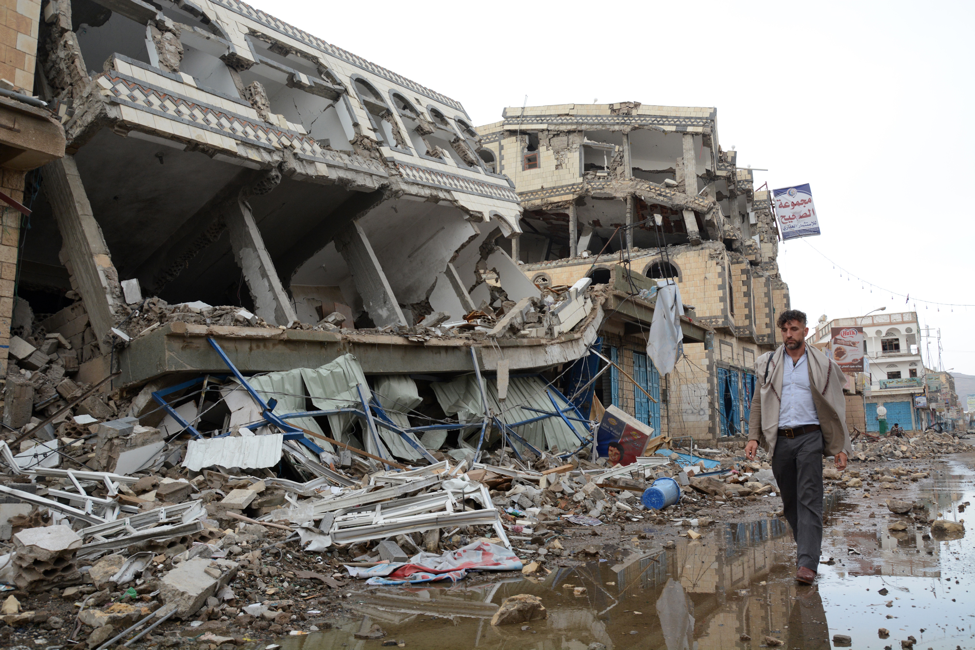 The Yemeni city of Sa'ada has been heavily hit by Saudi airstrikes, as shown in this image from August 2015. Photo credit: Philippe Kropf / United Nations OCHA

The Trudeau government has significantly undermined its stated commitment to human rights by going ahead with a $15-billion sale of light armoured vehicles (LAVs—combat transports that can be armed with lethal high-calibre weapons) to Saudi Arabia.

The Saudi regime’s vicious repression of its own population is well documented by human rights groups, and a two-year bombing campaign against Houthi rebels in neighbouring Yemen has claimed as many as 10,000 lives, more than half of them civilians by United Nations accounts. Depending on when they arrive, the Canadian-made LAVs could enter the battle on the Saudi side, and would be used in future, as they were in Bahrain in 2011, to quell domestic protest against the regime or its allies.

“We are concerned that this is the largest arms deal in the history of Canada and the military equipment is going to a country which is a human rights pariah, holding among the very worst such records, according to every organization that tracks this issue,” says Cesar Jaramillo, executive director of Project Ploughshares, a Waterloo, Ontario–based NGO focused on preventing war and building peace.

“If Saudi Arabia, with such a dire human rights record, both internally and externally, is eligible to receive Canadian military exports, then which country would not be?”

The U.S.-backed Saudi royal family suppresses virtually any dissent, criticism, democratic aspirations and civil rights. Saudi women are among the least free in the world; in 2013, King Abdullah granted women the right to run and vote in municipal elections, but they are still not permitted to drive, and make up a very small fraction of the national workforce. Beheadings or long jail terms, extensive flogging, the cutting off of hands and torture are common sentences for political crimes.

Saudi Arabia’s actions have also destabilized the region, for example, by invading Bahrain in 2011 and then Yemen in March 2015. The latter conflict has destroyed a country that was already one of the poorest in the world. Saudi bombing has targeted Yemen’s markets, houses, schools, factories, hospitals and health clinics (all war crimes), injuring 35,000 and starving the country’s 7.6 million people through the imposition of a blockade, according to the UN’s Office for the Co-ordination of Humanitarian Affairs.

The Saudi regime is also a financier of international terrorism, including the so-called Islamic State of Iraq and the Levant (ISIL), as revealed in a recent leak of Hillary Clinton’s emails from when she was U.S. Secretary of State. “We need to use our diplomatic and more traditional intelligence assets to bring pressure on the governments of Qatar and Saudi Arabia, which are providing clandestine financial and logistic support to Isis and other radical groups in the region,” said a memo dated August 17, 2014. A 2009 email sent under Clinton’s name, also leaked by Wikileaks, says “Saudi Arabia remains a critical financial support base for al-Qaeda, the Taliban, LeT [Lashkar-e-Taiba in Pakistan].”

Yet, in April 2016, Foreign Affairs Minister Stéphane Dion referred to the Saudi warfare state as Canada’s “strategic partner in an increasingly volatile region, particularly in the armed conflict against the so-called Islamic State” (emphasis added). The Liberal government is therefore determined to stand by a Conservative-brokered sale of LAVs—from one ally to another. “We will not weaken the credibility of the signature of the Government of Canada,” said the same government press release.

Ottawa also justifies the LAV sale by highlighting the economic benefits, such as the 3,000 jobs it claims will be sustained at General Dynamics Land Systems’ Canadian plants. However, most Canadians asked about the issue want the government to cancel the sale (an Angus Reid poll in February 2016 found only 19% support for the deal). “It is a pernicious argument to assert that Canadian jobs must depend on the killing, maiming, injuring and repressing of innocent civilians abroad,” says Peggy Mason, president of the Rideau Institute in Ottawa.

Jaramillo agrees. He points out there “are very strong ethical questions to be asked about linking the economic well-being of Canada to the suppression of human rights in other countries.” If jobs are the key consideration, he asks, “then what’s to stop Canada from selling weapons to ISIS or to the Mexican drug cartels? Sadly whenever commercial interests are pitted against the protection of human rights, the former often win.”

Richard Sanders, co-ordinator of the Ottawa-based Coalition to Oppose the Arms Trade (COAT), says if the Canadian government were really interested in creating jobs it would be investing in more labour intensive sectors such as health and education, “which also have added social benefits that weapons exports obviously don't provide.” In contrast, the military industry “creates relatively few jobs as it is so capital intensive,” he says. “It is one of the least efficient ways to create jobs.”

In Canada, military exports are reviewed to ensure there is no reasonable risk of the buyer government using Canadian weapons against civilians or otherwise to violate human rights. According to a report in the Globe and Mail in November, Minister Dion blocked a shipment of military goods to Thailand last year because the military junta running the country since 2014 has silenced the press, imprisoned political opponents and prevented public protests. The Globe has persistently highlighted the contradictions of a Canadian policy that blocks some arms sales but allows them to countries with a human rights record as poor as Saudi Arabia’s.

Sanders, who has been studying Canadian arms exports for 30 years, says Canada's export controls actually “have no teeth whatsoever.” Canada has guidelines but no firm rules, which explains why the government is able to sell billions of dollars worth of military technology to the United States, the most warring country on the planet. “The controls are a facade which protect the official mythology that Canada is a promoter of peace and human rights. That is their real function. The narrative that Canada has these so-called rules fits into the grand myth that this country is a force for peace in the world.”

Sanders emphasizes that when we are speaking about the impact of Canada’s arms sales on peace and human rights, the U.S. is the unmentioned “elephant in the room.” The U.S. government “is constantly at war,” he says. Canada’s exports to the U.S. consist of essential components for about 40 major U.S. weapons systems used in Iraq and Afghanistan. These included helicopters, warplanes and gunships, but also electronics for radar and communications, and targeting and guidance systems that do not go through any export screening at all.

“Washington is also the godfather of Saudi Arabia and many other countries that violate human rights,” says Sanders. “The mainstream peace movement seems to want to shy away from this central issue.”

Jaramillo agrees this “historic loophole” is a major issue. “This is the biggest chunk of exports annually and they get almost blanket approval from Ottawa. Of course, the U.S. has direct or indirect involvement in any number of conflicts around the world and is the biggest arms exporter globally.” Jaramillo opposes such exceptional treatment for any nation and wants Canada to treat all its trading partners in a similarly transparent manner. For him, all military exports should be dealt with on a case-by-case basis.

The Canadian government has failed to respond adequately to a number of Ploughshares’ concerns about the Saudi arms deal and “may be wilfully blind” to the reasonable risk that the monarchy might use the LAVs against civilians, says Jaramillo. “At the end of the day, what matters are the actual arms deliveries that are going to threaten civilians’ lives, enable human rights violations, cause human suffering, embolden dictators and sustain oppressive regimes.”

Asad Ismi is an independent journalist and activist who covers international affairs for the Monitor.

This article was published in the January/February 2017 issue of The Monitor. Click here for more or to download the whole issue.