TPP dead in the water without First Nation consent 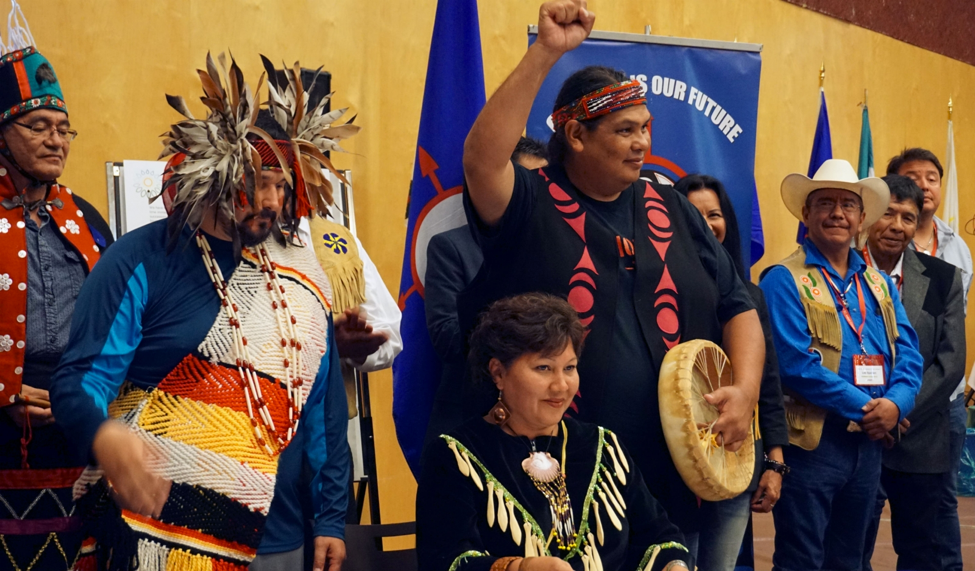 Tsleil-Waututh leaders sign the Treaty Alliance Against the Tar Sands in Vancouver on September 22, 2016. Photo by Elizabeth McSheffrey/National Observer.

Canada has promoted the Trans-Pacific Partnership (TPP) as being in the “best interests” of the national economy, promising more jobs and export opportunities while claiming it will also improve social conditions, reduce poverty and include strong environmental protections. An economic impact assessment of the TPP released in September by Global Affairs Canada estimates GDP gains of about $4.3 billion by 2040 if Canada ratifies the deal, and GDP losses of $5.3 billion if it doesn’t. Both amounts are essentially rounding errors—the equivalent of a few months’ worth of normal economic growth—but that didn’t stop TPP supporters using the announcement to urge the Trudeau government to commit, sooner than later, to firmly endorsing the agreement.

Lost in all the hype is the question of whether Canada can legally ratify the TPP—even if the Trudeau government decides that’s what it would like to do. Had the government asked this question of First Nations in Canada, the answer would likely have been no.

Canada has, once again, wrongly assumed it has the legal and political authority to negotiate a major international free trade agreement that would significantly impact the constitutionally and internationally protected rights of Indigenous peoples and their lands, waters and resources without their consent. Much of Canada has never been ceded or surrendered by Indigenous Nations. Decisions from Canada’s Supreme Court confirm that unceded Indigenous lands can be claimed as Aboriginal title, which amounts to the exclusive use, ownership, benefit and control of specific territories by Indigenous Nations.

Aboriginal title rights are protected in Section 35 of Canada’s Constitution, making the Indigenous right to make decisions over their lands and resources the highest law in the country. Canada was therefore required to obtain the consent of First Nations before engaging in TPP negotiations. Had this consent been granted, Canada should then have included First Nation representatives in the negotiation process. Neither of these steps happened, which calls into question the legality of any Canadian ratification or implementation of the TPP.

A major part of the problem is that this deal was negotiated in secrecy by the former Conservative government of Stephen Harper. Neither First Nations nor Canadians were asked for their views about Canada joining the TPP or subsequently given a role in the negotiation process. (An online consultation quietly advertised in the Canada Gazette in December 2011 was clearly targeted at business groups, as it sought advice only “on the scope of possible free trade negotiations between Canada and Trans-Pacific Partnership (TPP) members,” which assumes Canadian entry.)

In fact, the actual text of the agreement was not shared publically until November 2015, after five years of secrecy. Keeping the negotiating details from First Nations violated Canada’s constitutional obligations to act honourably and in good faith by sharing all relevant information with a view to obtaining consent prior to making any decisions that might impact rights and title. So, from the very beginning, Canada’s participation in the TPP contravened the Constitution. The government’s failure to consult and obtain the consent of First Nations at each phase since then has compounded the legal uncertainty of the agreement.

However, the TPP is by no means a done deal. While all 12 participating states signed off on the text of the TPP in February 2016, it still needs to be ratified by at least six countries, representing 85% of the TPP region’s economic output, by February 2018 for it to take effect. Each country also has to implement the agreement in its own legislature and there is no guarantee that Canada will end up with the support it needs to make this happen. If the current level of opposition to the TPP by civil society groups and Indigenous peoples is any indication, Prime Minister Trudeau faces an uphill battle.

Even prominent Americans like Bernie Sanders and U.S. presidential candidates Hilary Clinton and Donald Trump have said the TPP is a bad deal and should not be ratified. Canadian civil society groups have raised concerns related to negative impacts on the cost of medicine and health care, the environment, postal and auto workers, and even copyright rules. Still others worry that it will increase corporate powers and erode Canadian sovereignty by allowing transnational corporations to sue countries in private hearings not subject to Canadian laws.

With regard to First Nations, the potential impacts are substantial and can’t be remedied after the fact (i.e., after ratification). The transfer to third parties of lands, waters, natural resources or any other property interest (timber licences, for example) is a diminution of Aboriginal title and requires consent. The TPP purports to establish rules related to timber and other products extracted from Indigenous lands in Canada without first obtaining First Nation consent. The TPP fails to include specific provisions related to First Nation decision-making, control or benefit on any and all exports from their lands.

Trading relations with First Nations and negotiated treaties are the founding blocks of the state known as Canada. Even the Supreme Court has noted that trade was a critical aspect of developing and maintaining peace between First Nations and colonial governments. Furthermore, some of the treaty provisions also recognize the authority of First Nations over important economic and governance matters such as control of trade within their sovereign territories. Some treaties, especially those with the Mi’kmaq, specifically protected the right of First Nations to trade to their best advantage; these Aboriginal and treaty rights, agreements and practices now form part of Canada’s Constitution.

Canada acted outside of its constitutional authority when it denied First Nations information about, and access to negotiations and decision-making related to, the TPP. The government exacerbated the problem by failing to include provisions in the TPP that recognize First Nation decision-making (and benefit) over trade, while enshrining legal rights to investors that could undermine Indigenous land and food security, and sovereign governance generally.

Some UN experts point out the TPP and similar free trade and investment deals seriously threaten Indigenous land rights and natural resources, while others have denounced the TPP for how it will undermine state sovereignty and fail to protect international human rights. In undermining the capacity of states to protect Indigenous rights from being violated by transnational corporations, they argue, the TPP could lead to gross human rights violations and other significant threats to international peace and security, including negative impacts to food sources, water, health and living conditions. The evidence shows that investor–state dispute settlement cases under existing bilateral investment treaties and free trade agreements can result in severe penalties when states attempt to protect the environment, food or access to medicines.

Many of these experts have collectively called for the TPP to be amended to include protections for Indigenous and human rights. Here at home, the TPP is also inconsistent with Canada’s pledge to fully implement the United Nations Declaration on the Rights of Indigenous Peoples (UNDRIP), which protects Indigenous lands and enshrines the guarantee to free, informed and prior consent. As a result, the TPP violates the core principles and obligations of international law and Indigenous human rights and should not be ratified.

The interests at stake vis-à-vis First Nations are significant and demand a serious consideration before the TPP gets to the debate stage in Parliament. In fact, the legal deficiencies and potential impacts on First Nation rights are so substantial that Canada should be required to start over. There is no such thing as retroactive consultation and consent. The legal defect is so substantial that, on balance, the TPP can’t be saved—at least not in its present form.

While some may think this a drastic measure, one need only refer to the Northern Gateway pipeline controversy as an example of what happens when governments ignore First Nations. The Federal Court of Appeal recently held that if governments are not prepared to engage in proper consultations with First Nations, they should be prepared to watch their project approvals fail—no matter what their stated economic benefit.

If, in the words of the Court, “brief, hurried and inadequate” consultations do not suffice for a pipeline, a complete lack of consultations on an arguably more consequential Pacific free trade zone is unlikely to pass a similar legal test.

On Thursday, September 22, First Nations in Canada and Tribes in the United States signed a historic treaty alliance vowing to stop pipelines on Indigenous lands. First Nations have taken back their power.

It’s long past time to start talking to First Nations. The TPP is dead in the water otherwise.

Dr. Pamela D. Palmater is a Mi'kmaw lawyer and member of the Eel River Bar First Nation in New Brunswick. She teaches Indigenous law, politics and governance at Ryerson University and is Chair in Indigenous Governance. In June, she presented to Parliament’s international trade committee on the impacts of the TPP on Indigenous rights and governance.