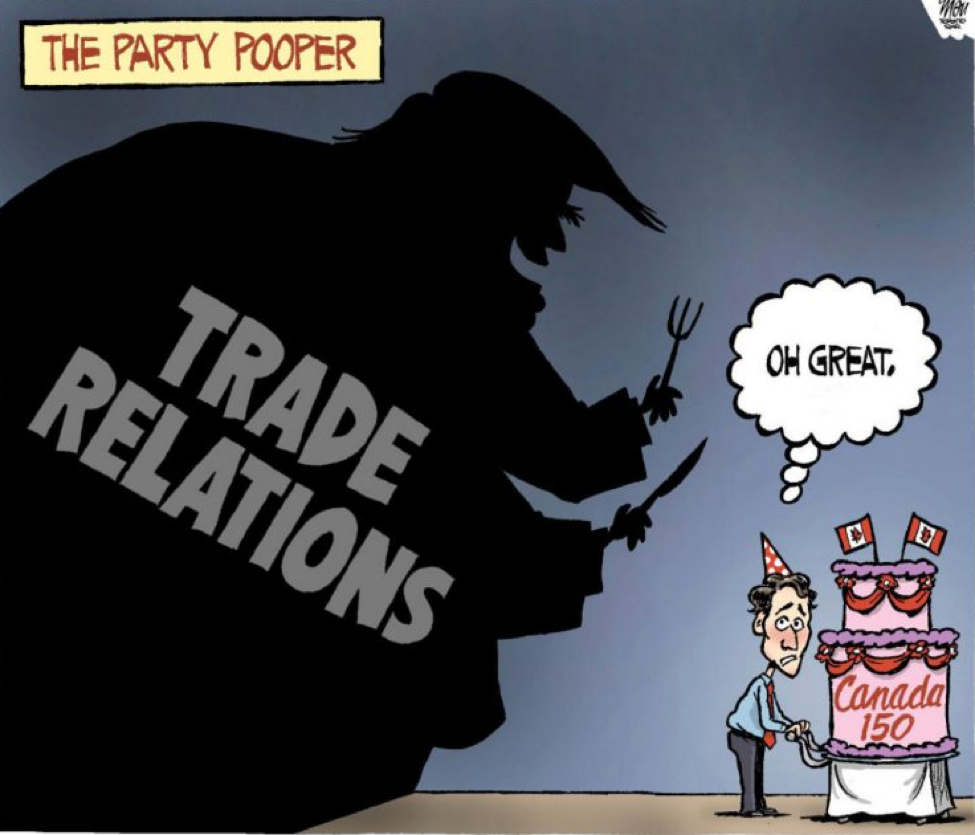 On May 18, U.S. President Donald Trump sent a letter to Congress announcing his intention to renegotiate NAFTA, starting a 90-day waiting period before North American trade negotiators can formally sit down to figure out what a new deal should look like. Policy-makers and big business groups in all three countries have called for a "modernization" of the 23-year-old agreement, though Trump has threatened to walk away from the table, and even tear up NAFTA, if an America-first solution cannot be found. On June 5, the Canadian government launched a public consultation on the matter, presumably to inform its negotiating position, but clearly all three countries hope to have a NAFTA-plus framework in place before the talks officially begin later this summer.

NAFTA transformed the economic and social landscape of North America. That much we can agree on. But views diverge significantly on whether or not the transformation has been for the better. The elite consensus is that NAFTA has greatly benefited Canada and its partners, since a major increase in cross-border trade produced millions of jobs. Implied here is that without NAFTA, supply chains would rupture, trade would collapse, jobs would disappear. There is substantial evidence this isn’t the case.

NAFTA has also played an important role in the growth of job insecurity and precarious work; in the dramatic increase in income and wealth inequality; in wage stagnation and the hollowing out of the middle class; in the weakening of public services and shrinking of Canada's social safety net. NAFTA is not solely responsible for these changes, but it was a key strand in a web of mutually reinforcing policies that have facilitated the "structural adjustment" of the Canadian state in line with the demands of the "new global reality."

Some former government insiders saw it coming. The late Mel Clark, Canada's former deputy negotiator for the GATT (the forerunner of the World Trade Organization), warned that NAFTA was most importantly an investment agreement, reflecting the ascendance of the forces driving the corporate globalization project. The deal’s key provisions protect and enhance the private property rights of internationally mobile corporations, impose constraints on policy flexibility, allow corporations to directly sue governments, and lock these and sibling policies prior to NAFTA in a treaty to prevent future governments from backsliding.

At its core, said Clark, NAFTA was about power—the transfer of power from workers, communities and governments to corporations. In his 1995 book, The Mexican Shock, Jorge Castañeda Gutman, who would later become Mexico's foreign minister under President Vicente Fox, similarly described NAFTA as “an agreement for the rich and powerful in the United States, Mexico and Canada, an agreement effectively excluding ordinary people in all three societies.” Nowhere was this more true than in Mexico.

Mexicans were told that joining NAFTA would bring the country into the first-world club of developed nations. The reality, for the large majority of its citizens, has been otherwise. Previously at the forefront of Latin American development, Mexico's living standards slipped to near the bottom of regional country rankings during the NAFTA era. Average Mexican wages dropped, as did the labour share of national income. Its poverty rate remained extremely high.

The NAFTA labour side agreement was totally ineffectual in raising wages. Only about 1% of Mexican workers belong to a democratic union, the vast majority being covered by "protection contracts" with company-approved labour groups. As U.S. and Canadian-based companies relocated significant production to modern plants in Mexico’s border export zones, worker productivity grew, but already low wages actually fell by 20%. Almost five million Mexican farmers were displaced from their land by the huge influx of U.S.-subsidized corn and other agricultural products. Some found seasonal employment in the agribusiness export sector. Others fled to the border export zones looking for factory work, or crossed into the United States.

I represented the CCPA at a trinational forum in Mexico City at the end of May, and spoke on a panel about NAFTA’s impact on Canada and what the Canadian government might want out of a renegotiation. I was not surprised to hear Mexican civil society representatives emphasizing the severity of the NAFTA-induced social crisis in their country, and calling for a new model of economic integration and development in North America. But how seriously should we take Prime Minister Trudeau’s promises to make NAFTA more progressive? Can Foreign Affairs Minister Chrystia Freeland really produce a deal that more fairly benefits workers in all three countries?

At a bare minimum, to begin to reverse the inequality trajectory of the last 23 years, the new NAFTA would need to include strong, enforceable labour rights provisions incorporating International Labour Organization and related UN human rights conventions—on par with the enforcement powers granted to corporations in the investor–state dispute mechanism (ISDS) in NAFTA’s Chapter 11. Moreover, to discourage corporations from going outside North America to take advantage of weaker labour rights in third countries, NAFTA content rules would have to be strengthened.

This is not, however, what Minister Freeland appears to have in mind, which is to use the labour chapter in the Canada–EU Comprehensive Economic and Trade Agreement (CETA) as a template. As the CCPA pointed out in the report Making Sense of CETA, the EU deal’s labour provisions are only a marginal improvement over the existing NAFTA labour side agreement: both are largely aspirational and without enforcement teeth. It is also hard to imagine the Trump administration pushing for improved rights, even for U.S. workers (despite Trump’s rhetoric), given its actions to date rolling back wage, health and safety protections. Nor will the hugely unpopular government of Enrique Peña Nieto be inclined to risk eroding its competitive advantage in the continental division of labour.

In bargaining with its much smaller NAFTA partners, the U.S. exercises disproportionate power. Trump is demanding major concessions and threatening to rip up the deal if he doesn't get what he wants, though it’s anyone’s guess at this point what his red lines are. As we saw with his recent decision to leave the Paris accord on climate, predicting Trump's actions is risky.

Under these circumstances, Canada should be preparing its own NAFTA termination strategy that carefully evaluates the transitional costs and benefits. As CCPA trade researcher Scott Sinclair said in a recent Toronto Star op-ed, should NAFTA die Canada-U.S. trade would revert to WTO tariff rates, which would add between $3.5 billion and $5 billion in export taxes. “That’s a speed bump, for sure, but would not bring trade to a screeching halt,” he wrote. On the plus side, it would eliminate NAFTA's most pernicious elements, like ISDS, and restore some policy flexibility (in energy, for example).

NAFTA’s death could also give rise to new opportunities for multilateral governance of the kind trade justice activists discussed in Mexico City this May. For example, multilateral agreements to enforce labour rights would be far more effective at distributing trade benefits than the toothless clauses in Canada’s free trade deals. Paris accord signatory nations might also be encouraged to impose carbon taxes on imports from countries that fail to reduce their greenhouse gas emissions, as was done with the Montreal protocol on ozone-depleting substances.

As world-renowned economist Thomas Piketty wrote, globalization must be fundamentally re-oriented as a matter of urgency. The demise of NAFTA might even be an opportunity to begin developing a more inclusive, equitable and sustainable model of globalization on the North American continent.

Bruce Campbell is the former executive director of the CCPA. The CCPA will be submitting comments to the government’s public consultation on a NAFTA renegotiation, which you will be able to find at www.policyalternatives.ca.

This article was published in the July/August 2017 issue of The Monitor. Click here for more or to download the whole issue.