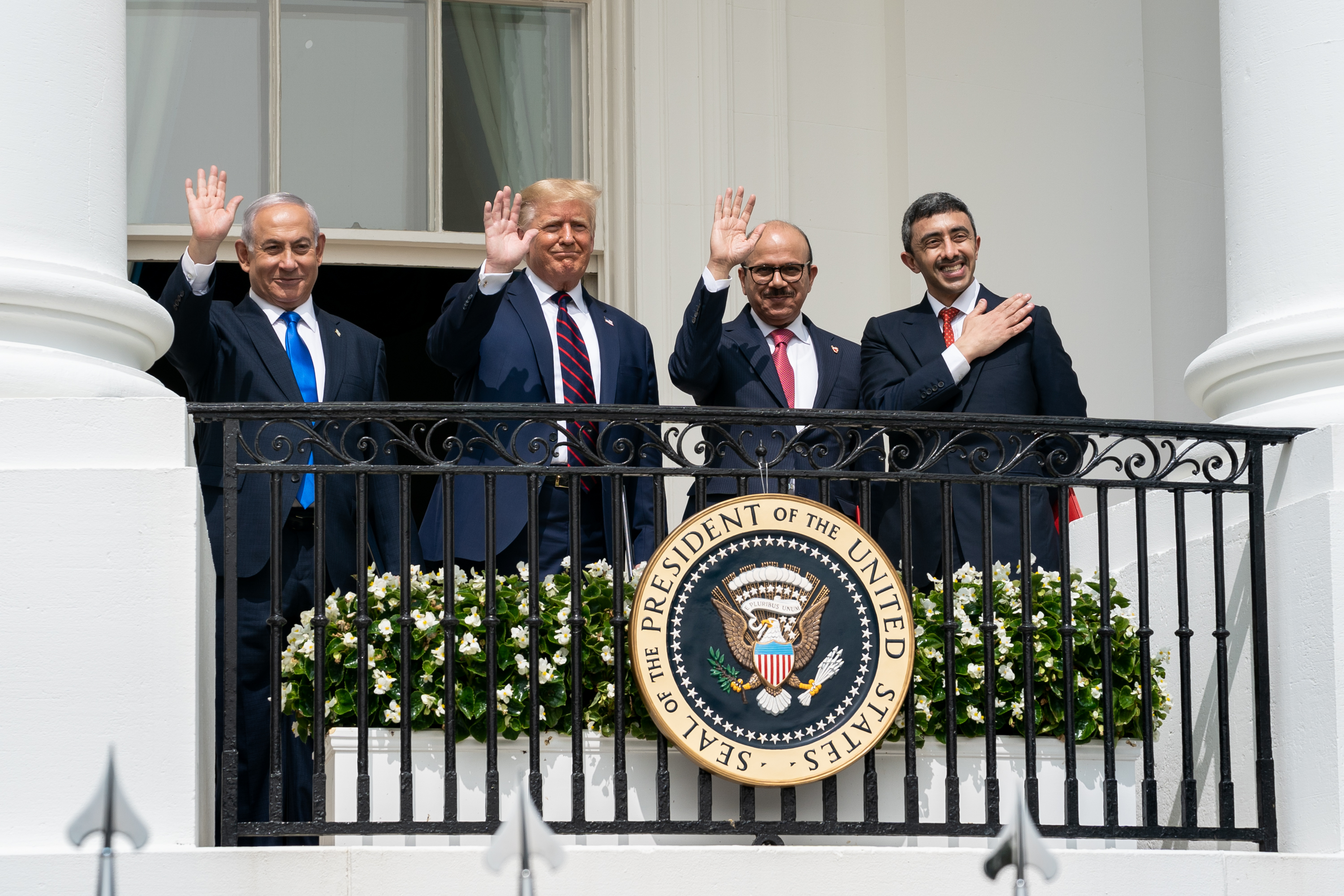 In a 1967 speech, Martin Luther King Jr. called the United States government “the greatest purveyor of violence in the world today.” He identified economic profit as the motivator of this violence. The record of Washington’s international aggression since then has been horrendous, as tacitly recognized even by Donald Trump in his promises, before and after the 2016 election, to end the United States’ “endless wars.” Trump nonetheless takes his place in the pantheon of violent U.S. presidents who have, since King’s judgment, left millions of people dead in the Global South in the wake of incompetent military escapades and cruel economic warfare.

What distinguishes Trump’s foreign policy is a pronounced nihilism borne of the decline of U.S. empire, which appears clearer under his administration than any other. Alfred McCoy, a professor of history at the University of Wisconsin and the author of In the Shadows of the American Century (Haymarket Books), told The Intercept’s Jeremy Scahill in July 2017 that Trump is “accelerating perhaps markedly, even precipitously, the U.S. decline.” McCoy predicts that China will overtake the U.S. both militarily and economically by the year 2030, but he claims Trump is a byproduct, and not the root cause, of this erosion of dominance.

In foreign and trade policy, the Trump administration has lashed out not just at rival states but also Washington’s allies, which only reinforces the appearance of waning imperial influence. U.S. withdrawal from the Paris agreement on climate change, the U.S.-Russian intermediate missile treaty, and Trump’s threats to not renew the START agreement limiting the number of deployed nuclear warheads offer prime examples, according to Conn Hallinan, a columnist with Foreign Policy in Focus, a project of the Washington-based Institute for Policy Studies. To this list we can add Trump’s pulling out of the Trans-Pacific Partnership trade deal, the Iran nuclear agreement and the Palestinian peace process.

At the same time, the administration has demonized China—for all its domestic economic woes and the high U.S. death toll from COVID-19—while increasing U.S. military operations and surveillance in the South China Sea, making a nuclear military conflict more likely. Trump’s unmitigated hostility toward Washington’s main rivals on the world stage, China and Russia, has resulted in uniting them against him. Aside from withdrawing from the arms control treaty with Russia, Trump has imposed heavy sanctions on Moscow and is pressuring European countries who depend on Russian supplies of natural gas to stop construction of Nord Stream 2, a new pipeline that will expand Russian gas supplies to Europe (see John Foster’s article, “Canada, black swans and oil,” in the July/August 2020 issue of the Monitor).

“Trump’s campaign against China has mixed results,” Hallinan tells me. “The trade war is mostly a joke…but the relentless war on China does have an impact, partly by forcing China to spend money on its military, and to pursue policies that alienate many countries in Southeast Asia, including Vietnam, Malaysia and the Philippines.”

China’s claims in the South China Sea violate international law, Hallinan continues, but they are also a reaction to the U.S. military buildup in the region beginning under the Obama administration. “In the short run, the U.S. has made some inroads in isolating China, but in the long run, the U.S. is losing influence. The Chinese economy is simply too big to suppress, and Trump’s trade war has damaged the U.S. more than China.”

Hallinan claims the U.S. withdrawal from the Paris climate accords alienated many in Asia. “By 2030, 600 million Indians will  not have access to sufficient water, a direct result of climate change,” he notes. “Countries all over Asia will be deeply affected by the loss of glaciers, and the U.S. position currently contributes to that looming crisis. China is making efforts to combat climate change and that sits well with many countries in the region.”

As with China, Trump has increased the prospect of nuclear war with Russia by abrogating arms control treaties and moving U.S. troops closer to Russian borders. But all this, along with economic sanctions, has failed to make Russia capitulate to U.S. dictates. “Losing Nord Stream 2 will hurt Russia, but not enough to force it to knuckle under to the U.S.,” says Hallinan. “Russia has been developing its relations with Iran, India and China for several years, so it has outlets for its oil and gas and industrial goods.”

It’s worth noting that Russia has more nuclear weapons in storage than the U.S., rendering comments from Trump’s arms-control negotiator—“We know how to win these races and we know how to spend the adversary into oblivion,” said Marshall Billingslea in May—virtually moot.

In the Middle East, Trump has alienated the Arab majority by supporting Israel more than any other U.S. president, especially through his moving of the U.S. embassy to Jerusalem, which signified his absolute repudiation of the Palestinian peace process. To further isolate the Palestinians and strengthen Israel even more, Trump recently brokered a deal between Israel, the United Arab Emirates (UAE) and Bahrain (all three countries are U.S. client states) in which the latter two agree to recognize Israel and normalize relations.

“These agreements are designed to give an Arab stamp of approval to Israel's status quo of land theft, home demolitions, arbitrary extrajudicial killings, apartheid laws, and other abuses of Palestinian rights,” says Medea Benjamin, co-founder of the U.S. women-led peace group CODEPINK and co-founder of the human rights group Global Exchange.

“The deal should be seen in the context of over three years of Trump administration policies that have tightened Israel's grip on the Palestinians: moving the U.S. embassy from Tel Aviv to Jerusalem, recognizing the Golan Heights as Israeli territory, and creating a so-called peace plan with no Palestinian participation or input. All of these have hurt the U.S. reputation among Arab people of the region.”

Benjamin points out that the Israel-UAE-Bahrain deal is also aimed at isolating and weakening Iran, considered an enemy by all three countries. “This dovetails with Trump's anti-Iran obsession, which includes U.S. withdrawal from the Iran nuclear deal,” she tells me.

Earlier this year, the U.S. came very near to all-out war with Iran when Trump ordered the assassination of Iranian general Qasem Soleimani. Patrick Cockburn notes in War in the Age of Trump (Verso) that the targeted killing of Soleimani at Baghdad airport, where he was allegedly en route to meet the Iraqi prime minister, initially rallied Iranian public opinion behind the general. This opportunity for the Iranian regime was wasted, says Cockburn, when its army mistakenly shot down a Ukrainian airliner killing 176 people, half of them Canadian citizens and permanent residents, which redirected public anger on the government.

Benjamin says she sees the imposition of severe U.S. economic sanctions and military pressures on Iran as having made life more difficult for millions of Iranians. But as far as the Iranian government goes, this aggressive policy has “empowered the more conservative factions [who are more anti-U.S.], who won the majority of seats in the recent national assembly elections and may well win the upcoming presidential election,” she says.

Trump’s Iran policy has also divided the U.S. from its closest allies in Europe such as Germany, who wanted to preserve the Iranian nuclear deal, and has isolated the U.S. internationally, according to Benjamin. She notes the recent U.N. vote in which the Dominican Republic was the only member of the Security Council to support the U.S. insistence on extending the arms embargo against Iran. “Trump has diminished U.S. power in the Middle East,” concludes Benjamin. “After 20 years of war and occupation, the U.S. has not only shed blood and trillions of dollars but has lost influence and the respect of many of the region’s people.”

In Latin America, too, Trump’s policy has been largely destructive. He has been successful in obliterating relations with Cuba, in backing the overthrow of the elected leftist government of Evo Morales in Bolivia, in 2019, and in helping to prevent Brazil’s popular leftist former president, Luiz Inácio Lula da Silva, from returning to power in the 2018 elections. Trump has tried (and, so far, failed) to overthrow governments in Venezuela and Nicaragua and has put a $15 million bounty for the arrest of Venezuelan President Nicolás Maduro.

“In 2017 and 2018, the U.S. unleashed its most lethal and successful weapon: the illegal economic blockade that is restricting food and medicine to the people of Venezuela,” says Maria Páez Victor, a Venezuelan-Canadian sociologist and former instructor at the University of Toronto and York University. “The sanctions are a crime against humanity, and U.N. experts have stated so, because they directly target and hurt a human population. In just one year the sanctions directly killed 40,000 Venezuelans,” she adds, citing numbers in a 2019 study from the Washington-based Center for Economic and Policy Research (CEPR).

Alexander Main, director of international policy at CEPR, tells me “there is no doubt that the U.S. played a role in subverting democracy in both Brazil and Bolivia.” He points to recently produced evidence that Brazilian prosecutors, with support from the U.S. Department of Justice, “colluded with a judge (Sérgio Moro) to design a strategy, with clear political objectives, to ensure that the popular former president Lula da Silva would be jailed and barred from running in the 2018 presidential election. The banning of Lula’s candidacy, which had been leading in the polls, effectively enabled the electoral victory of far-right candidate Jair Bolsonaro.”

In Bolivia, former president Evo Morales was overthrown in a military coup in October 2019 after being accused of committing electoral fraud. Main points out that this accusation from the Organization of American States (OAS) was later shown to be false by various independent analyses, including at CEPR and the New York Times. “The Trump administration immediately voiced support for the far-right de facto government that illegally took power following Morales’ ouster,” he says.

Main emphasizes that these undemocratic developments in Bolivia and Brazil have had “terrible consequences for both countries.” Bolivia, for example, “has endured a racist government that has sought to roll back Indigenous rights in the country and that has massacred protesters,” he tells me. “In Brazil, the Bolsonaro government has encouraged illegal clearing of the Amazon for farming and mining and has engaged in frequent attacks on the rights of the Indigenous, Afro-Brazilians and LGBTI persons.”

Asad Ismi reports on international affairs for the Monitor.