Home › Publications › The Monitor › “We are talking about a fascist regime”

“We are talking about a fascist regime” 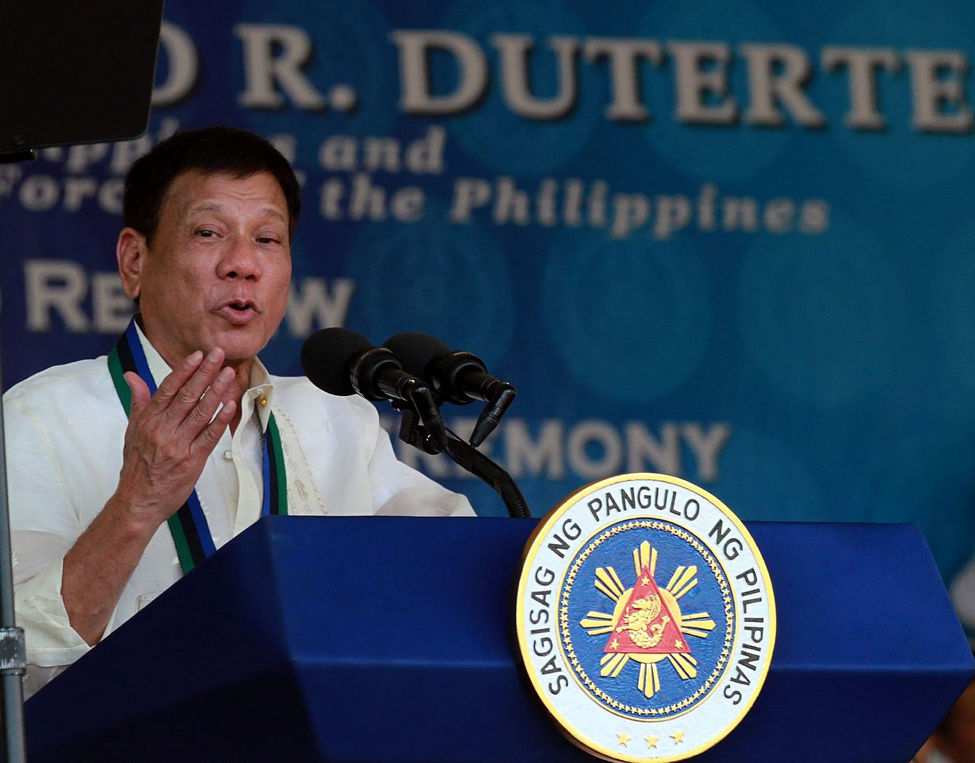 While the Trump presidency is mired in chaos, another national leader, also accused of being a fascist, is solidifying his rule of the Philippines.

Rodrigo Duterte was elected president of the Southeast Asian island nation in May 2016 and remains popular. A January 2017 poll showed he enjoyed a trust rating of “excellent” among voters. He has also wiped out his political opposition. Since last year’s election, virtually all Liberal Party lawmakers have joined the president’s ruling Partido Demokratiko Pilipino-Lakas ng Bayan (PDP-Laban) in congress, giving Duterte complete control over the national legislature.

Remarkably, Duterte has also co-opted the Communist Party (the dominant section of the left), which has joined his government and been given cabinet posts. Unlike Trump, however, Duterte calls himself a socialist and came into office on a social reform platform, railing against the elite (represented by the Liberals). He pledged to wipe out corruption, poverty, and drug trafficking and addiction, but so far has only focused on the last issue, resulting in the horrific extrajudicial killings by police of more than 7,600 people, most of them low-level drug sellers and users (methamphetamines are the main drugs consumed in the country).

At the end of January, Duterte removed the police from the drug war after drugs squad officers killed a South Korean businessman. But he promptly handed the responsibility to the Philippine Drug Enforcement Agency (PDEA), to be supported by the military. The drug war has been widely criticized, including by the United Nations and the United States government, which has dominated the Philippines since 1898. Duterte famously reacted to U.S. criticism by calling former president Obama’s a “son of a bitch” and telling him to “go to hell.” Duterte cancelled joint military exercises with the U.S. and has reoriented the Philippines’ main alliance toward China. It is a sea change for his nation and a significant defeat for U.S. policy in Asia.

Like Trump, Duterte is a braggart. He has even boasted about personally killing drug dealers in the city of Davao when he was mayor—a statement designed to encourage police to do the same on levels the president likened to the number of Jews murdered in the Second World War. During his election campaign in 2016, Duterte made an even more shocking remark when he said he “should have been first” in a gang rape and killing of an Australian missionary during a prison uprising in Davao in 1989, while he was mayor.

Walden Bello, a former member of the Philippines’ House of Representatives and leading analyst of national politics, wrote last May that he thought Duterte’s comment was “a fatal mistake” for his election chances. But much like Trump’s comments about women, the outrageous quip ended up having little effect on the soon-to-be-president’s popularity. Bello, a professor of sociology at both the University of the Philippines and the State University of New York at Binghamton, ran unsuccessfully for senator in that election as an independent. He respresented the leftist Akbayan (Citizen’s Action) Party for six years in congress.

Bello says he believes Duterte is in the process of setting up a fascist dictatorship. The president “uses the war on drugs, not so much to solve the drugs problem, but to further an authoritarian agenda, to gain total and undisputed control,” he tells me. “We are talking about a fascist regime, which is an extraordinary response to the crisis of the system, but which does not replace the system itself. I use ‘extraordinary’ here to mean not business-as-usual politics.”

According to Bello, the Philippine system is in “deep structural crisis.” Duterte is to that crisis what Roosevelt was to the crisis of U.S. capital in the 1930s, and what Hitler was to the crisis of German capital at that time. In this case it stems from “the failure of the liberal democratic order to deliver popular empowerment and the wealth redistribution” promised when the Ferdinand Marcos dictatorship was replaced in 1986.

“Popular anger and alienation from this failed project was what catapulted Duterte to power in an electoral insurgency. He combined the image of a strongman who would get rid of the ‘national chaos’ and a ‘socialist’ who would discipline the elite, though he does not seem to understand what socialism is.”

Bello points out that 40 of the richest families in the Philippines control most of the country’s wealth and the media. This semi-feudal ruling oligarchy includes a landowning elite that monopolizes vast swathes of land in the countryside, causing massive landlessness and poverty among peasants and small farmers, which has given rise to both a communist and a religious (Muslim) insurgency.

According to figures released by the Philippines Statistics Authority in March 2016, more than 26.3% of the population was poor in 2015. The land-owning elite has dominated the centres of power in the capital Manila since independence in 1946, noted Barry Desker, from the Nanyang Technological University, in a June 2016 column, adding Duterte is the first president that does not belong to this elite.

However, now that the Philippine elite is allied with Duterte it is unlikely the president will move against their interests by engaging in significant wealth redistribution, especially not critically needed land reform. “That makes social reform very difficult,” says Bello. “And indeed, no reform has taken place and none seems to be in the offing. But this is not because Duterte does not have the space for reform. It is that he has entrusted the key levers of the economy (the ministries of finance, trade, industry, planning and the budget) to neoliberal technocrats who are very status quo oriented, while he focuses on the anti-crime campaign, which he admits is the only expertise he has.”

Duterte has given Communist Party–affiliated cabinet members control over the ministries of social welfare and agrarian reform, but these agencies are “very weak relative to the finance, trade, industry, planning and budget ministries,” says Bello. Still, he adds, the president’s alliance with the elites does not make him their instrument. “I would even say that many factions of the elite are behaving towards Duterte like small merchants towards the mafia, that is, to buy protection.”

In his 10 months in office, Duterte has transformed not only Philippine politics but also the country’s international alliances, to the extent of upending Asian geopolitics. For more than a century, the Philippines has been a colony and then a neocolony of the United States, hosting two large U.S. military bases that made the country one of Washington’s two “unsinkable aircraft carriers in the Pacific” (the other is Japan), according to Conn Hallinan, an analyst with Foreign Policy in Focus, a project of the Washington, D.C.–based Institute for Policy Studies.

In October, Duterte went on a state visit to China where he told his hosts: “I announce my separation from the United States both in military, not maybe social, but economics also.  America has lost. I've realigned myself in your ideological flow and maybe I will also go to Russia to talk to (President Vladimir) Putin and tell him that there are three of us against the world: China, Philippines and Russia. It's the only way.” The Philippines and China have competing claims in the South China Sea, but Duterte has put this issue aside.

“The move [toward China] by Duterte reflects a growing understanding in Asia that China is on the way up and the U.S.—while still the most powerful military force on the planet—is in decline,” says Hallinan. He quotes a CIA study claiming that by 2023, Asia will have surpassed North America and Europe in GDP, population size, military spending and technological investments. By 2025, two-thirds of the world’s population will reside in Asia, 7% in Europe and 5% in the U.S. “Those are the demographics of eclipse,” says Hallinan.

Duterte recognizes that China is the leading trade partner for Japan, South Korea, Australia, Vietnam and India, and the third largest for Indonesia and the Philippines, adds Hallinan. “Putting the South China Sea disputes on the back burner not only reflects an understanding of this reality, but also a well-founded fear that there could be a military confrontation between China and the U.S. in the region.”

More than 400 of the 800 U.S. military bases around the world are in Asia. In another embarrassment for the Trump administration, a 2016 video recently surfaced in which Steve Bannon, a top political advisor to Trump, claims “We’re going to war in the South China Sea” in the next 10 years. Trump began his tenure by questioning the “One China” policy, and his Secretary of State, Rex Tillerson, threatened to block China from accessing its chain of bases in the South China Sea. “The first would mean a break in diplomatic relations and the second, war,” Hallinan warns. Trump has since backtracked on both issues, reducing tensions, but “a serious danger of war remains.”

Because war could easily go nuclear—NATO maintains the right to initiate a nuclear first strike, China had an estimated 260 warheads in 2015, and North Korea continues to flout a missile test ban—Asian countries are “trying to avoid anything that might lead to a military clash,” adds Hallinan. “In that sense, the action of the Philippines is a boost for China. If war is avoided, in the long run, China will replace the U.S. as the major power in the Western Pacific.”