Home › Publications › The Monitor › A web of deceit

A web of deceit 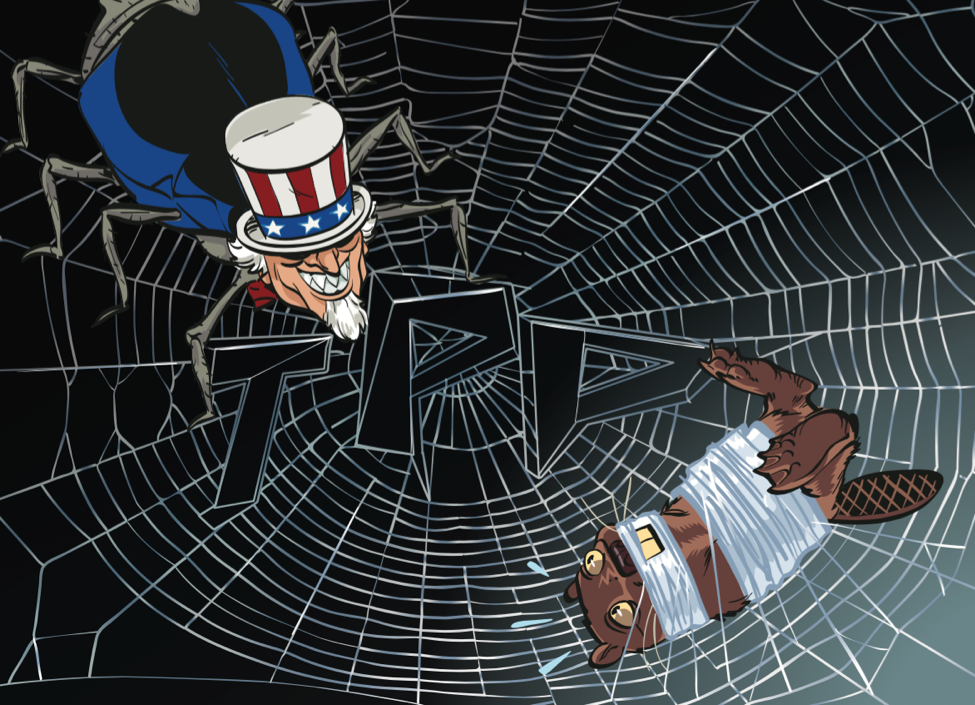 The Trans Pacific Partnership (TPP) is an overtly U.S.- driven and dominated trade agreement designed to bolster America’s corporate and geopolitical ambitions. The U.S. Trade Representative even calls it a “made in America” deal.

This does not mean the majority of U.S. citizens and workers will benefit. On the contrary, the TPP is simply the latest in a series of U.S.-led agreements that subject American workers to intensified globalization and international competition, resulting in job losses, growing inequality and downward pressure on wages. The deal protects the rights of corporate investors while offering little assurance that any benefits from enhanced trade will be shared fairly.

Whether the TPP ever comes into force will also be largely determined by U.S. domestic politics. Both Hillary Clinton and Donald Trump profess their opposition to the TPP as currently negotiated. This makes U.S. ratification far from certain, especially since both houses of Congress must either approve or reject the deal without amendments.

As I write this, the outcome of the U.S. elections is still undecided. Even for Canadians it has been chilling to watch the campaign unfold. A Trump victory would be an unthinkable calamity on so many levels. The likely demise of the TPP, while welcome, would hardly register in the balance given his climate change denial, support of lavish tax cuts for the rich and services cuts for the rest, threats to abolish the Environmental Protection Agency, racist and sexist slurs, and disturbing personality.

On the other side there is Clinton, who now opposes the TPP, despite her past support of the agreement. Unfortunately, this provides one of the few openings for Trump’s bombast and bullying to resonate in head-on debate. Trump’s attack on the TPP, which mostly boils down to a narcissistic belief in his own deal-making acumen, has little in common with the principled opposition of U.S. progressives such as Bernie Sanders, or the contributors to this special issue of the Monitor.

In July 2016, Clinton’s supporters on the Democratic platform committee defeated an attempt by Sanders’s followers to have the party clearly oppose ratifying the TPP. Sadly, Trump’s “Is it Obama’s fault?” taunt to Clinton evokes the disillusionment many feel with the party establishment’s approach to trade treaties. Trump’s rhetoric strikes a chord with the Democrats’ disregarded working class base.

To the extent there is any elite soul-searching over the negative impacts of a quarter-century of NAFTA-style globalization, it is mostly confined to hand-wringing over failures to share the benefits of trade and help displaced workers adjust to intensified global competition. The policy neglect for the plight of blue-collar workers, marginalized groups and rust-belt communities is indeed shameful.

But this narrative conveniently misses the main substance of the progressive critique of globalization and free trade agreements. These treaties are more about concentrating corporate power than they are actual trade. In fact, the addressable barriers to international trade (mainly tariffs) are now so low that even the proponents of new deals like the TPP are forced to admit any conceivable economic boost is marginal (see article in this issue by Hadrian Mertins-Kirkwood). Further liberalization would create little new wealth to distribute, even if elites were so inclined.

Unfortunately, as Sanders, Elizabeth Warren, Joseph Stiglitz and other progressive critics warn, the not-so-hidden purpose of the TPP and similar treaties is to coerce governments into making legislative and regulatory changes that favour corporate special interests—reforms that most politicians are not willing or able to justify in open debate before their own citizens.

The Obama administration’s dogged support for the TPP is a case in point. The president must rely almost entirely on Republican members of Congress to advance his failing hopes of approving the treaty on his watch. As Melinda St. Louis and Melanie Foley write in their TPP update, the Obama administration still views the lame-duck session of Congress, when enough retiring and defeated members might be coaxed into backing the unpopular deal, as its chance to ram through TPP ratification before a new president takes office. It is pursuing this profoundly cynical, anti-democratic strategy even at the risk of undermining the Democratic campaign for the White House and control of Congress.

Fortunately, at this point, it looks like the administration does not have the Congressional backing it needs, and progressive U.S. groups are working hard to keep it that way. The most probable scenario appears to be that the new U.S. president, especially if it is Clinton, will reject the agreement in its current form and seek to reopen negotiations. This, and the recent narrow electoral victory for the ruling coalition in Australia (which threatens TPP ratification there), could well unravel the deal.

Canadians and their government need to prepare for either eventuality: U.S. ratification in the lame-duck session or, as appears more likely, a renewed push from the incoming U.S. administration to re-negotiate the already imbalanced deal. Whoever becomes the next president, U.S. pressure for re-negotiation can hardly be expected to improve the deal from a public interest perspective.

While most of the TPP drama is occurring south of the border, the Canadian people and their new government still have the power to decide whether Canada should be part of the agreement. There are very good reasons, many of them outlined in this special issue, why Canada should walk away.

The commitments government trade negotiators make behind closed doors lock in a myopic and increasingly embattled neoliberal orthodoxy—small government, big finance, weak regulation and a preference for privatized service delivery—that prevents future governments from changing course without great political and financial costs. Progressives might welcome such policy handcuffs as part of a global environmental treaty for reversing climate change. In the case of the TPP we get the opposite: more restraints on environmental protection measures in the interest of freeing capital and investment.

From a Canadian perspective the agreement is riddled with ideology from the previous Harper government, surely one of the most right-wing regimes in recent Canadian history. There are numerous examples of how the TPP does not reflect the values of those who voted for a new government and progressive change:

As currently written, the TPP can only worsen today’s inequality of wealth and power. Likewise, it will strip governments of the tools they need to address climate change—an existential threat that will require more, and more assertive, government intervention and regulation. Extreme investor rights agreements such as the TPP are relics of an era when market fundamentalism—the belief in the virtues of fully liberalized markets—was the prevailing political wisdom. Even institutions like the International Monetary Fund, the notorious enforcer of neoliberal “structural adjustment” the world over, is rethinking this position.

The significant public opposition to the TPP in the U.S. from across the political spectrum is a sign the ideology driving the TPP and other expansive trade and investment agreements is close to exhausting its public legitimacy. Protest against the TPP is as strong in Japan, Malaysia, New Zealand, Australia and Mexico. Canadians and their political leaders would be wise to pay attention. At the same time, it would be irresponsible for progressive voices to sit back and expect the TPP to meet its demise as a result of U.S. domestic politics.

This special issue of the Monitor sets out the case against Canadian ratification of the TPP. Criticism of the nakedly self-interested corporate agenda embodied in the TPP is neither anti-trade nor protectionist—it is simply drawing an obvious conclusion. A project defined overwhelmingly by the commercial aims and interests of U.S. multinationals—from Big Pharma and Hollywood to the powerful fossil fuel, banking and biotech industries—cannot be assumed to advance the broader public interest within any of the TPP countries.

Scott Sinclair is the director of the CCPA’s Trade and Investment Research Project. He is the co-editor, with Stuart Trew, of the new book, The Trans-Pacific Partnership and Canada: A Citizen’s Guide (Lorimer), available now.