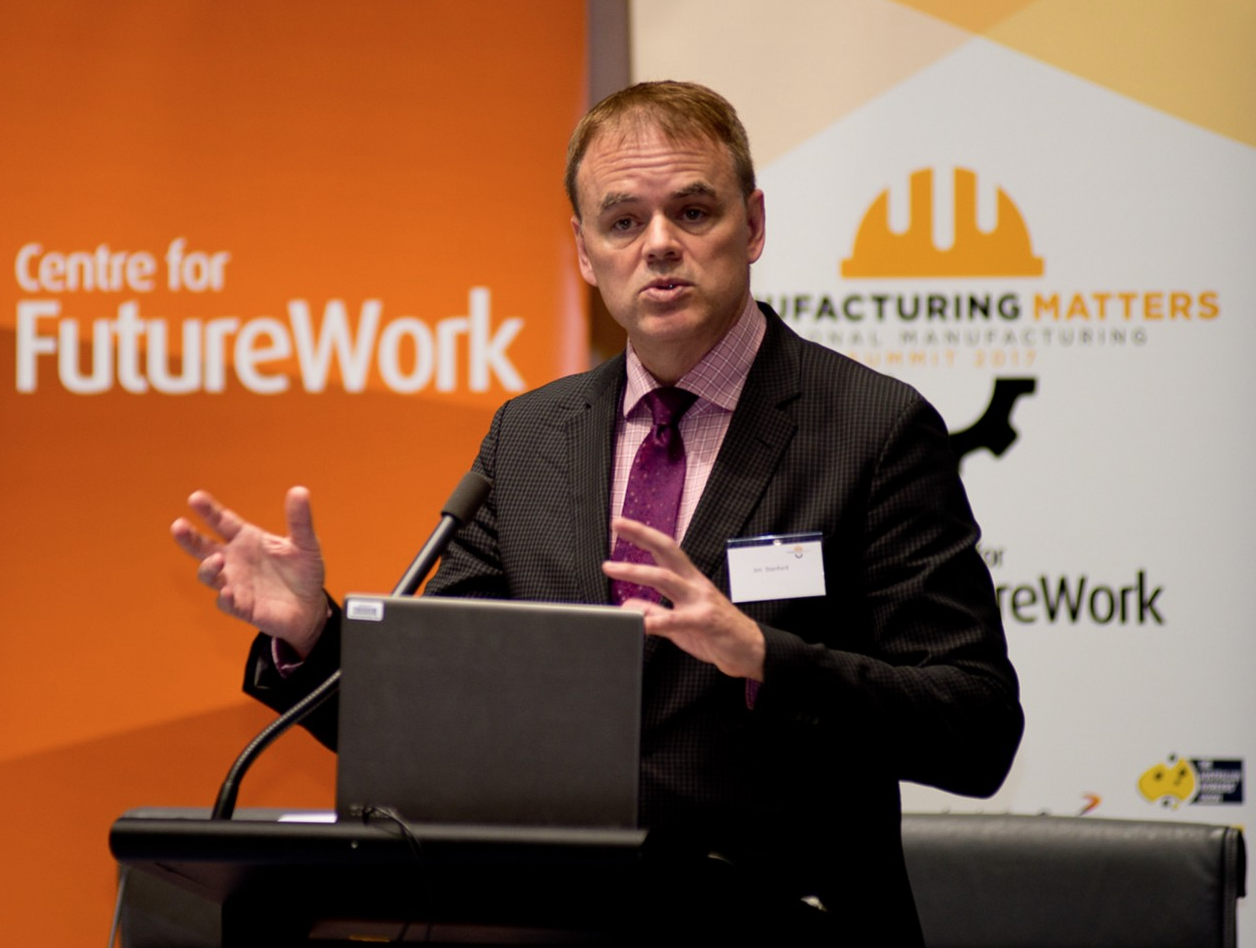 The Progressive Economics Forum awards a biennial prize named after John Kenneth Galbraith to recognize lasting contributions to progressive economic theory and policy in Canada. The 2018 Galbraith Prize was awarded to Jim Stanford, former economist with Unifor (previously the Canadian Auto Workers), long-time research associate with the CCPA, and currently Director of the Centre for Future Work in Sydney Australia. Stanford delivered a lecture on occasion of his award at the Canadian Economics Association meetings in Montreal in June, on the theory and practice of progressive trade policy. The following excerpt from his talk leads off our Monitor feature on the promises and problems with the Trudeau government’s so-called Progressive Trade Agenda.

I am humbled and deeply honoured to receive the Galbraith Prize, named after one of my true heroes. I was lucky enough once to meet Dr. Galbraith in person, when I was a graduate student at Cambridge University. He was a towering figure, both intellectually…and in his physical stature! I am also incredibly grateful to the 14 individuals who co-nominated me for this award, and to the selection committee of the Progressive Economics Forum. Finally, I would like to acknowledge and thank the previous winners of the Galbraith Prize: Mel Watkins, Kari Polanyi Levitt, John Loxley, Mike McCracken, Lars Osberg and Marjorie Griffin Cohen. On top of their enormous contributions to progressive economics in Canada, every one of them has influenced and mentored me personally in important ways; I pledge to return the favour, by supporting up and coming progressive economists as they find their role in our struggle to build a more diverse and emancipatory economics.

My lecture today will discuss the need for, and possible components of, a progressive trade policy. Progressive economists in Canada have been fighting neoliberal trade deals for a generation—to the point where we sometimes sound like a broken record. But suddenly, neoliberal trade policy is at a crossroads, and everything is on the table. This reflects the cumulating failures of the existing trade system: in particular, the imbalances and dislocations caused by decades of beggar-thy-neighbour competition to run ever-larger trade surpluses, and the race-to-the-bottom in social, labour and environmental standards that the current business-friendly rulebook of globalization facilitates and endorses.

This moment also reflects a growing crisis in democracy in the advanced capitalist economies. Existing democratic mechanisms are proving inadequate to channel popular discontent in positive, evidence-based directions. Instead, ugly and increasingly dangerous forms of right-wing populism are capitalizing on discontent, creating a platform for inconsistent, arbitrary and ultimately destructive policy responses. Donald Trump and his xenophobic unilateralism is the most important case in point, but the phenomenon is much broader—and, with Doug Ford’s election in Ontario, we see it taking firm root in Canada’s political culture as well.

Into this ferment, progressives must inject an ambitious, honest and pragmatic vision of how to manage international trade, capital and human flows in ways that protect and enhance living standards, equality and the environment. A progressive understanding of globalization and its effects must be rooted in our overall alternative analysis of how the capitalist economy works, and doesn’t work, and draw on heterodox economic theories of why international trade and investment flows can cause lasting hardship and losses (in contrast to conventional trade theory which always sees trade as a “win-win” outcome)

In my full lecture (a considerably abridged version of which is published here) I discussed the major channels through which progressive policy tries to make the economy work better for the majority within one national economy. These core strategies are useful in thinking about progressive international trade policy, because exactly the same tools will be important in our efforts to achieve progressive economic outcomes under globalization. The most important strands of progressive strategy include:

These have been the most important ways that progressives, over the history of capitalism, have tried to shape the economy to attain higher living standards, protect the environment and build stronger, more equal communities. To a large extent, describing “progressive trade policy” should start by preserving and enhancing our capacity to apply those same key strategies.

Moreover, it is important to note that the themes listed above, for the most part, are not usually discussed in trade agreements (whether bilateral, multilateral, or at global institutions like the WTO). So focusing on trade agreements—what is in them and what is not in them—may not be the most important avenue for achieving a progressive trade policy.

In that light, here are 10 key themes that I think are crucial to a progressive vision of globalization, one that is consistent with progressive goals of employment, equity and sustainability:

This vision of actively managed international trade and investment does not imply erecting barriers to trade, nor restricting the amount of trade. To the contrary, by eliminating deflationary biases inherent in the existing trade system (whereby all countries try to achieve trade surpluses, and deficit countries suppress domestic demand to reduce imports), our progressive approach would stimulate more trade, not less. It cannot therefore be described as protectionist or anti-trade.

The coming years will constitute a turning point for the international trade system, which is coming apart at the seams after decades of imbalance and dislocation. Donald Trump and other erratic populists, who ultimately want to reinforce corporate power (albeit in a more nationalist framework), will not help those suffering under globalization. Instead they will lead the world into intensifying social conflict, recession, and even war.

Into this maelstrom, progressives need to energetically inject a more hopeful and positive vision of how to rein in globalization, seriously address trade imbalances and resulting unemployment, and make rising living standards, inclusion and sustainability the goal of economic policy (including trade policy) rather than an afterthought. This is truly a time for progressive trade economists to think big, and to make our voices heard.