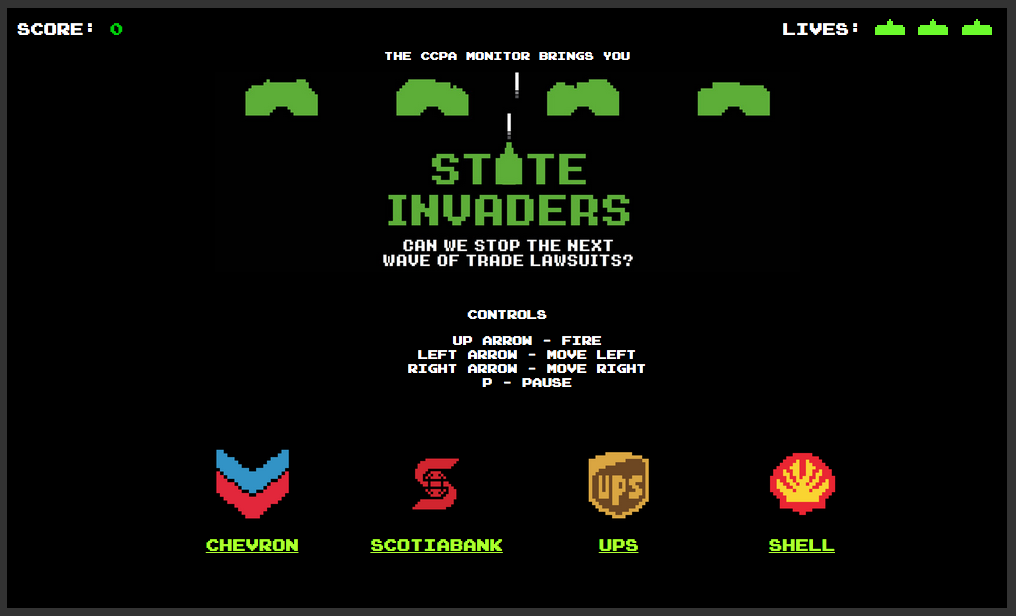 On May 27, the federal government announced it had signed a foreign investment promotion and protection agreement (FIPA) with Guinea. It didn’t make the news, and why would it? Two-way trade between Canada and the West African nation was $61.2 million in 2014—the same amount put toward Parliament Hill security in the 2015 federal budget. There is so little Canadian investment in the country it doesn’t register in government statistics. There is no Guinean investment in Canada, and with an economy 282 times smaller than our own that is not about to change. Despite government claims to the contrary, there is no solid evidence FIPAs actually promote investment, as the name suggests.

So why sign the deal? Well, there is some Canadian investment in Guinea. Rio Tinto Alcan, with headquarters in Montreal, is part owner and operator of a bauxite mine, the lease on which expires in 2038. Parent company Rio Tinto also has dibs on the Simandou iron ore project, which it calls “one of the largest-known undeveloped high-grade iron ore resources in the world.” The company’s concession will enable the development of “the largest mine and infrastructure project ever undertaken in Africa,” which includes “the progressive development of a 100 million tonne per annum mine, a 650-kilometre trans-Guinean railway and a new deep-water port.”

Canadian companies owned $27 million worth of Guinean mining and infrastructure assets in 2013. While that may seem small, with KPMG predicting Guinea will be the fourth-largest bauxite producer in the world by 2017, there’s a much bigger booty to be had. Until now, political instability—decades under one dictatorship or another, a 2009 freeze in diplomatic ties with La Francophonie, a coup and transition to civilian government in 2010, and the recent Ebola epidemic—has made developing the country’s mineral deposits difficult.

But after a second free election in 2013, global mining companies are swarming, looking for an edge. Canada concluded its FIPA negotiations with Guinea only three months after those elections, and only eight months after the Guinean government announced it was further lowering royalties and export taxes on bauxite. The FIPA announcement was as low profile as the one this May, but Canada’s mining sector was effusive.

The Mining Association of Canada (MAC) praised the “strategic” investment deal because it will “help ensure that Canadian mining investment is supported and protected in these important emerging markets.” The association added that Canada’s FIPAs—there are about 30 in force with another 20 in the pipes—provide companies that are making long-term investments with an “added layer of confidence.”

It’s the confidence that comes from knowing any further delays in production, possible increases to the royalty rate, community resistance to mining projects, or even future political unrest will be paid for by the unsuspecting Guinean people, not company shareholders. Of all the international agreements and conventions out there, none is stronger, or at least as easy to enforce, than a bilateral investment treaty.

We planned this issue on the theme of State Invaders, a spin on the retro video game Space Invaders where players must fight off wave after wave of alien bombing. You can fight off ISDS cases yourself in an invaders-type video game the Monitor built to draw more attention to this increasingly embattled corporate rights regime.

A special feature starting on page 16 of our July-August issue exposes the ways corporations and investors use treaties like the FIPA with Guinea, NAFTA’s chapter 11 and other free trade deals to undermine democratic decision-making. The courts can only protect us so much from these relentless lawsuits (as you’ll find out in the game if you hide behind any one of the buffers). That’s because investor–state dispute settlement (ISDS) gives investors extra-legal rights to be compensated when government action, even the legal passage of rules and regulations, impacts their profits.

The federal government should appreciate how anti-democratic this system is: Canada has faced more ISDS cases than any other developed country in the world. Unfortunately, it doesn’t seem to care.

An interesting thing happened as the rest of the issue came together. In reading about Canada’s policies on tax havens, low provincial royalty rates on national resource extraction and the federal government’s insistence—as a condition of international aid—that other countries lower theirs, too, and the hyperactive signing of FIPAs with underdeveloped but resource-rich countries, we get a good picture of how an “energy superpower” behaves and in whose interests.

There’s almost no chance Canada will be sued by a Guinean investor. In an immediate sense, this new FIPA is another corporate handout to Canada’s mining companies abroad. But in accepting the ISDS regime so completely, by inserting investor “rights” into deals with China, Europe, South Korea and (through the TPP) Japan, Canadian democracy is fundamentally weakened.

Millions of people worldwide are pushing back against the ISDS regime. Mainstream economists like Joseph Stiglitz and Paul Krugman condemn it. Even the right-wing/libertarian CATO Institute thinks it needs to be taken out of U.S. trade and investment deals. There has never been a better time for Canada to pull the plug on this unwinnable State Invaders game.

Stuart Trew is the editor of the CCPA Monitor.