Home › Publications › The Monitor › Workers, wages and the Ontario election

Workers, wages and the Ontario election

Hard-won improvements to labour law can be rolled back. Our job, before and after the vote, is to make sure they are expanded.
Author(s):
Pam Frache
May 1, 2018 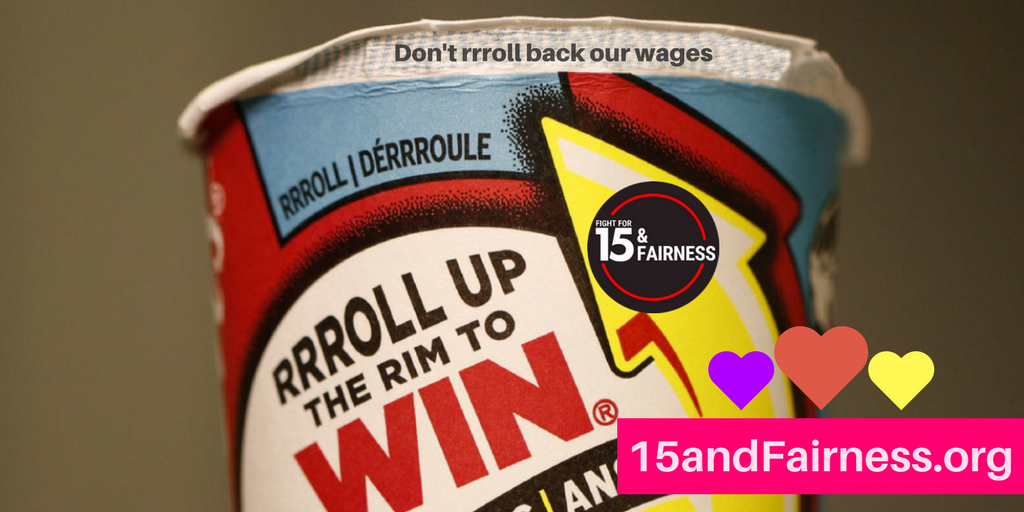 Workers won substantial improvements in 2017 to the laws that govern Ontario workplaces. Outside the province, the $14 minimum wage (rising to $15 in January 2019) likely garnered the most attention. But it was just a piece, albeit an important one, of a legislative reform package that will make a big difference to the lives of millions of people in Canada’s most populous province.

What exactly did Ontario workers gain under the government’s Fair Workplaces, Better Jobs Act (Bill 148). Well, for a start:

- 10 days of job-protected emergency leave was extended to an extra 1.7 million workers in small workplaces. And for all workers, the first two emergency leave days are paid (a first for Canada).

- Workers with more than five years of service with an employer are guaranteed an extra week of paid vacation (up to three weeks from two).

- People performing similar work, whether they are employed full time, part time or as casuals, must be paid the same—a big win for women and workers of colour, who are overrepresented in non-full-time positions. The law also applies to temp agency workers, who must also be paid the same as workers hired directly by the client company.

-  A fairer calculation of public holiday pay for part-time workers.

-  Measures that will make it easier for workers to join unions, including the extension of card check and successor rights in the building services sector (e.g., for unionized security guards or cleaners, who frequently lose their jobs when a new service provider takes over a building contract).

- A new financial penalty for employers who keep workers on call all day without guaranteeing them a shift. By this time next year, these workers, and anyone whose shift is cancelled with less than two days’ notice, will be entitled to a minimum of three hours’ pay. Furthermore, workers who aren’t given four days’ notice of their next shift will have the right to refuse it without reprisals.

In addition to these changes in Bill 148, which received royal assent in November, the Ontario government announced this winter that it was enacting labour legislation to hold companies accountable for workplace injuries suffered by temp agency hires. Under current Ontario law, temp agencies absorb the costs of these injuries, including increased Workers’ Safety and Insurance Board (WISB) premiums, which creates a financial incentive for companies to hire from temp agencies and to assign those workers the most dangerous jobs.

Because these workers are already treated as temporary and disposable, there’s no incentive for the client company to properly train them. This helps explain why the injury rates of temp agency workers are notoriously high, and why companies are so keen to outsource rather than put people on the payroll. Our victory in making the client company responsible for workplace injuries takes away another key incentive for companies to use temp agencies.

Unfortunately, the existence of this new labour legislation does not mean we can sit back and relax. We haven’t actually won $15 and fairness (the name of our campaign), at least not yet. The $15 landmark, alongside a number of other crucial provisions in Bill 148, won’t come into place until 2019—many months after the late spring election. As we know from Ontario’s past experience, legislation can be repealed just as easily as it is created.

One big reason to stay vigilant is that Ontario businesses have expressed varying degrees of opposition to these modest concessions to workers. Although the $15 minimum wage tends to get the most flack in the mainstream media, a very different story is being told in the back pages of the business press, on the Ontario Chamber Commerce and Canadian Federation of Independent Businesses websites, and in articles published by employer-side law firms.

Most of this lower-profile analysis admits the minimum wage is not the key factor in business objections to the reforms. It’s the subsequent wage increases, the ones other employees who already earn $14 or $15 an hour will be demanding, that worry them. The big business lobbyists are also against the new public holiday pay provision that ensures part-time workers are compensated properly for statutory holidays. And they particularly oppose the legislation’s equal pay provisions, which make it easier for workers to join unions, as well as the scheduling rules listed above.

In a May 2017 opinion piece published in the Toronto Sun, lawyer Sunira Chaudhri proclaimed that, with Bill 148, Premier Wynne had “effectively unionized Ontario,” equipped the Ministry of Labour with a “sharper set of teeth to sink into offending employers” who violate the law, and forced a redistribution of financial resources from the top of the salary grid to the bottom. We can debate the veracity of these assertions, but there’s no doubt that corporate Ontario is mad as hell.

In his Progressive Conservative (PC) leadership bid, the former Toronto city councillor Doug Ford, brother of deceased former mayor Rob Ford, made it absolutely clear he opposes a $15 minimum wage, and that he puts business considerations above the well-being of workers. “The market should dictate,” he’s fond of saying when asked about any number of issues.

Unlike his predecessor, Patrick Brown, who was not confident enough to directly attack calls for $15 and fairness (“it’s not the $15, it’s the phase-in”), Ford is now promising to leave the minimum wage at $14, cancelling the January 1, 2019 hike. He opposes any measure that cuts into the profit margins of business and he opposes union rights.

A PC government could easily reopen and repeal Bill 148—and roll back workers’ wages even further. We should remember that Ford’s father (Doug Ford, Sr.) was the Member of Provincial Parliament for Etobicoke-Humber during the Mike Harris regime (1995–2002). One of the first things that government did was roll back progressive labour laws implemented by the Ontario NDP, and they didn’t stop there. The Harris government rolled back employment standards, attacked unions, slashed social spending, eliminated rent control and imposed lethal cuts to social assistance rates (the nearly 25% rate cut has still not been fully restored).

There is a different mood in Ontario today than back in ’95. Thanks to grassroots organizing, people are feeling more confident to demand better work, which is why the Wynne government’s new labour laws are popular. It also explains why the Liberals are campaigning so hard on the $15 minimum wage and taking up the mantle of fairness at work. But it’s not a given that support for these changes will translate into another Liberal government mandate.

After 14 years in office, there is legitimate anger at the way the government privatized hydro, underfunded social programs and botched its green energy plan by delivering it privately rather than publicly. Just last fall, the government legislated back to work 12,000 college faculty who were striking for equal pay between part-time and full-time college teachers.

At the same time, the spontaneous explosion of solidarity for Tim Hortons workers, in Ontario and across the country, after some franchises clawed back benefits in response to Bill 148, is a testament to the anger with corporate Canada that exists just below the surface among millions of ordinary people. It seems clear, from interactions the $15-and-fairness campaign has had with people over the past years, that a big vision for stronger laws, especially motivated in response to Tim Hortons, would be extremely popular.

So, which provincial party will best capitalize on this moment by offering a vision that gives expression to a growing anti-corporate sentiment? The answer to this question lies with us.

That any labour law improvements made their way into law in the first place is thanks to workers who fought for them in every corner of the province. Workers identified their own agenda and stuck to it, even when pundits said we should stop it or drop it. Our movement has engaged in literally hundreds of thousands of conversations—in houses of worship, on campuses, in our communities and in our workplaces. Together we have built each other’s confidence to fight, to challenge the corporate fearmongering and to expose the big business agenda that would rather fix the price of bread and keep wages at sub-poverty levels than share their vast wealth with the rest of us.

With an Ontario election just weeks away, more workers than ever will be paying attention to politics. Now is precisely the right time to demand the boldest possible vision for decent work, and to organize to see it through. In doing so, we not only build the confidence of workers to demand more of their politicians, we also build the confidence of candidates running in the June election to think big. Elections that are not driven by movements from below rarely deliver the goods we want.

It won’t be enough to defend what is already on the table. Using momentum from legislative wins to date, workers must be calling for more: better enforcement of labour laws; at least seven (not just two) paid emergency leave days; an end to exemptions that leave too many workers without basic employment standards; more protections for migrant workers; greater regulation of temp agencies; just-cause protection for workers when they demand their rights under the law; the right of all workers to join unions without employer intimidation; broader-based collective bargaining so that workers can organize across sectors and across franchises like Tim Hortons.

And that’s just a start. Winning these kinds of legislative changes could give workers more power at work and even greater confidence to fight on every front, inside and outside the workplace.

In this context, we write off Doug Ford at our own peril. We simply cannot allow him to masquerade as a defender of the “little guy” when the PC party under his leadership is driving an agenda that will make life worse for those it purports to protect. At the same time, we have to acknowledge why people may be drawn to Ford—we must recognize the kernel of truth that makes his populism attractive to some voters—so that we can focus legitimate anger in a constructive direction.

In the end, if we agree that successful electoral outcomes are a byproduct of effective movement-building, then one thing is absolutely clear: we need to use the days and weeks ahead to build a movement so powerful that no matter who forms the next government they will be too afraid to attack our gains, and have no option but to deliver more.

Pam Frache is the Co-ordinator of the Fight for $15 and Fairness campaign in Ontario. Visit 15andFairness.org for more information or to get involved.