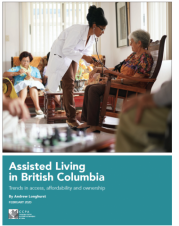 Between 2010-2017 BC added only 105 units of publicly subsidized assisted living despite a growing seniors’ population while—more than 10 times that number—1,130 private-pay units were added. Seniors who cannot afford to pay privately may go without care altogether or wait until their health deteriorates to the point of requiring a nursing home or hospitalization, this report explains.

These are among the key findings of Assisted Living in British Columbia: Trends in access, affordability and ownership by Andrew Longhurst, who notes that access to subsidized assisted living dropped by 17 per cent province-wide between 2008 and 2017 (measured as the number of units per 1,000 seniors age 75-plus).

The report makes two key recommendations to address the growing access problem in BC. The first is the creation of new capital and operating funding opportunities for non-profit organizations and health authorities to increase the supply of publicly subsidized assisted living units as part of a home and community care funding plan. The second focuses on requiring detailed disclosure to improve transparency and accountability in both assisted living and long-term care.