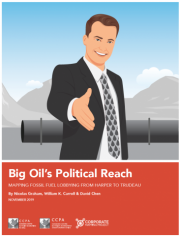 In Canada between 2011 and 2018 the fossil fuel industry was one of the most active industry groups lobbying the federal government with over six contacts per working day made with government officials. During this period, the intensity of lobbying increased when salient policy issues—like the Environmental Assessment Act—arose or when there were big stakes for industry such as major pipeline decisions and approvals.

This study provides a network analysis of federal lobbying by the fossil fuel industry in Canada, covering both the Conservative government of Stephen Harper and the Liberal government of Justin Trudeau. The network this research uncovers amounts to a small world of intense interaction among relatively few lobbyists and the designated public office holders who are their targets. In comparing lobbying across the Harper and Trudeau administrations, we find a pattern of continuity-in-change: under Trudeau, the bulk of lobbying was carried out by the same large firms as under Harper but focused more on government bureaucrats rather than the members of Parliament who were more frequently contacted under Harper. The shifting pattern in focus is concerning as it indicates that elite policy networks outlast election cycles and potentially the stated platforms of elected officials. The study also examines lobbying in relation to specific projects such as pipeline proposals and decisions.

The lobbying period under examination coincides with a period during which climate change was acknowledged as an increasingly urgent threat and one in which the Canadian economy became focused significantly around carbon intensive resources.

The report is co-published by the Corporate Mapping Project and the Canadian Centre for Policy Alternatives BC and Saskatchewanoffices.