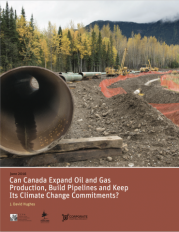 Under the Paris Agreement, Canada has pledged to reduce its greenhouse gas emissions to 30% below 2005 levels by 2030. This study assesses the consequences of several scenarios of expansion in the oil and gas sector in terms of the amount that the non–oil and gas sectors of the economy would need to reduce emissions to meet Canada’s Paris commitments. It finds Canada cannot meet its global climate commitments while at the same time ramping up oil and gas extraction and building new export pipelines.

The study also reviews existing pipeline and rail capacity for oil exports under the cap on oil sands emissions announced last year by the Alberta government (set at 100 million tonnes (Mt) per year) and finds Canada has enough capacity to handle the 45% increase in oil sand production this would entail. It also takes a close look at oil price trends, and finds that new pipelines with tidewater access are unlikely to confer a significant price premium, as is widely believed.

This is the first study released as part of the Corporate Mapping Project, a research and public engagement initiative investigating the power of the fossil fuel industry in Western Canada. The CMP is jointly led by the University of Victoria, Canadian Centre for Policy Alternatives and the Parkland Institute.