The Canadian Centre for Policy Alternatives' annual look at CEO compensation reveals that by 12:00 noon on January 3rd, the first official working day of the year, Canada’s Elite 100 CEOs (the 100 highest paid CEOs of companies listed in the TSX Index) will have already pocketed $44,366. It takes the Average Joe an entire year, working full-time, to earn that same amount.* 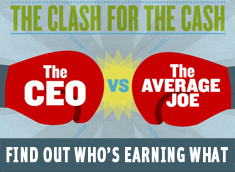 Find out more in the report, and visit The Clash for the Cash: CEO vs. Average Joe to find out how much these contenders have earned so far.

*Based on 2010 CEO compensation data and the 2010 average Canadian wage.