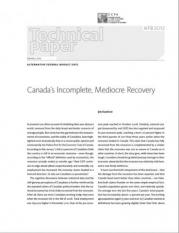 This study finds that, despite claims to the contrary, the damage of the recession is still very much with Canadians and that the labour market is still much weaker (measured by the employment rate) than it was before the recession. After adjusting for population growth, neither GDP nor employment growth have yet to recoup the ground lost during the 2008-09 downturn. Real per capita GDP remains 1.4% lower as of the third quarter of 2011 than it was at the beginning of 2008. The study also suggests that the incomplete and relatively weak state of Canada’s economic recovery should give considerable pause to economic and fiscal policy-makers before embarking on a campaign of fiscal austerity.