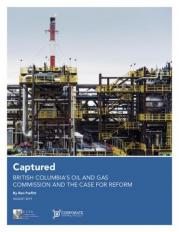 This report reveals that from an early stage BC’s Oil and Gas Commission bore the hallmarks of a captured regulator. The very industry that it was formed to regulate had a significant hand in its creation and, too often, the interests of the industry it regulates take precedence over the public interest.

This study looks at the evolution of the Commission, the phenomenon of captured regulators and some troubling examples of rules the agency was formed to uphold were systematically broken with few—if any—serious consequences for the companies that violated them or for the Commission failing to uphold them. These examples point to regulatory breakdown of a massive scale and the need for major reforms to better safeguard the public interest.

The report concludes with a list of recommended policy changes to address some of the more glaring shortcomings of the current regulatory approach with specific attention paid to ensuring the changes reflect the government’s avowed commitment to implementing the United Nations Declaration on the Rights of Indigenous Peoples.

The report is co-published by the Corporate Mapping Project and the Canadian Centre for Policy Alternatives BC office.