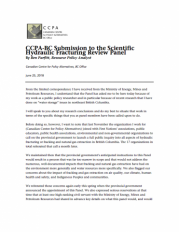 At the end of June 2018, CCPA-BC Resource Policy Analyst Ben Parfitt was asked to make a presentation to the Province's Scientific Hydraulic Fracturing Review Panel because of his research into “water storage” issues in northeast British Columbia. In November 2017, the CCPA-BC, First Nations’ associations, public educators, public health associations, environmental and non-governmental organizations called on the provincial government to launch a full public inquiry into all aspects of hydraulic fracturing, or fracking, and natural gas extraction in British Columbia based on Parfitt's work, and recently reiterated that call because of concerns about the impact of fracking and gas extraction on air quality, climate, human health and safety, and Indigenous Peoples and communities.