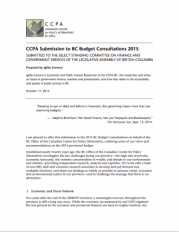 CCPA Submission to BC Budget Consultations 2015

2015 marks the sixth year of BC's recovery from the recession. But it's been a slow and largely jobless recovery. The provincial government's economic strategy hinges on natural gas/LNG developments that are unlikely to materialize—and that, if they did, would be terrible for the environment. Meanwhile, our province continues to face high levels of inequality and poverty.

But it doesn't have to be this way.

Here are seven recommendations for BC’s provincial budget that would help create a more just and sustainable economy, where prosperity is shared broadly and British Columbians have access to good jobs. 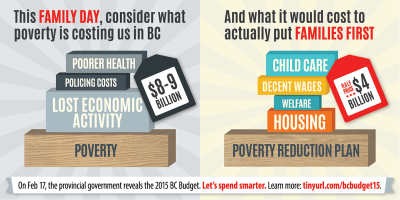 Tolerating high rates of poverty and homelessness is unfair and unnecessary in a wealthy country like Canada. It’s also very expensive both for the BC government and for society as a whole. We spend between $8.1 and $9.2 billion annually in higher costs to the criminal justice system, lost productivity, lower school success, and higher health costs. That’s huge; it’s close to 5% of the total value of our economy.

A poverty reduction plan, on the other hand, would cost BC less than half of that – an estimated $3 to $4 billion per year when fully phased in. Action to reduce poverty would provide an immediate boost to the provincial economy – with more money in their pockets, lower income families would buy more goods and services from local business.

Upgrading and expanding our transportation infrastructure is a necessity. Now—while interest rates are at rock-bottom lows—is the best possible time for governments to borrow to make strategic capital investments. We are going to have to do it in the next 5–10 years, so we might as well take advantage of the cheap borrowing rates. And initiating major construction projects now will boost BC’s weak job market.

BC needs a long-term infrastructure investment plan to ensure that all communities have access to viable transportation options. And since the infrastructure we build today will serve BC for the next 30–50 years, it’s crucial to make it as sustainable as possible.

Instead of providing subsidies to the oil and gas industry that directly contradict BC’s climate action plan, Budget 2015 should increase support for research and development into new green technologies.

Budget 2015 can take meaningful climate action by providing subsidies for energy retrofits for homes, as well as schools, hospitals and other public buildings. We also recommend that Budget 2015 reinstate the annual increases to the carbon tax of $5 per tonne for the next four years, which would ultimately raise about $2.2 billion.

BC Budget 2015 should begin the implementation of the $10/day Child Care Plan. Investing in more accessible and affordable quality child care will have ripple effects across the provincial economy and provide a good start for all BC children. It’s also an important way to create good jobs. An expansion of community-based prevention initiatives, mental health initiatives, and seniors care services is another key area the 2015 Budget must address.

BC Budget 2014 capped total education funding increases to about 0.6 per cent annually over the next three years, which represents a cut to education funding in real terms as it doesn’t cover inflation, and fails to account for the expected growth of student enrolment. We recommend that BC Budget 2015 invest more in education, and provide additional funding to expand access to programs in high demand, make training programs more affordable, and introduce targeted employment programs.

Budget 2015 will also need to adequately fund the K–12 system to honour the government’s agreement with BC teachers – and should go further to address pressing issues like class size and composition.

6. Improve the Fairness of the Tax System

BC’s overall tax system is now very regressive—meaning people with higher incomes are not paying a fair share. When all provincial personal taxes (income, sales, property and carbon taxes and MSP premiums) are considered, the higher your income, the lower your total tax rate. We recommend that BC strike a Fair Tax Commission to make recommendations for how the province can reform the tax system to meet our economic, social and environmental needs and reduce income inequality.

Budget 2015 must also freeze MSP premiums, which have increased annually for the last six years and have doubled since 2000. The provincial government now collects about the same revenue from MSP premiums as it does from corporate income taxes. BC is alone in the country in choosing to raise revenues in such a regressive manner, using what is effectively a head tax, with all but low-income households paying the same dollar amount regardless of their means.

Further, Budget 2015 should make permanent the top tax bracket of 16.8 per cent for individuals earning over $150,000, which is currently set to expire in December 2015. 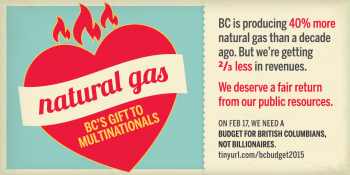 BC used to collect well over $1 billion per year from natural gas royalties, but over the last five fiscal years these averaged a mere $330 million per year. The tax/royalty regime for LNG put forward in Budget 2015 should place more emphasis on achieving public benefits before signing away the rights to this non-renewable, publicly owned resource. BC should also collect more from companies using our water and forest resources.

What about the fiscal budget balance?

The budget measures outlined above will help reduce a number of deficits facing our province: our large social deficit in poverty and inequality, the environmental deficit, the jobs deficit and the affordability deficit.

BC’s finances are in good shape and we can afford to borrow a little more to make key public investments. With sufficient revenue reform—items 6 and 7—these investments can be made without running a large fiscal deficit.