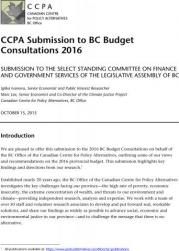 CCPA Submission to BC Budget Consultations 2016

Canada’s economy has disappointed in 2015, dipping into a recession in the first half of the year. BC’s economy is expected to perform better than other provinces but that’s largely because of weakness elsewhere (especially in resource-dependent provinces). Private sector forecasters have lowered their projections for this year’s economic growth in BC to 2.2% (from 2.7% this time last year). Projections for next year are more optimistic (2.7%) but they should be taken with a grain of salt, given the record of overly optimistic forecasts in the last few years.

Even before the current commodity price decline, BC’s economy wasn’t doing all that well. Growth has been modest since the 2008/09 recession, and employment growth has been particularly slow.

In such economic conditions, governments can play a role to stimulate the economy and support demand by running deficits and increasing public investment in infrastructure. Both provincially and federally, however, an obsession with balanced budgets is acting as a drag on growth.

We recommend that the 2016 BC Budget should prioritize measures to set the foundation of a more just and sustainable economy, which is less dependent on resource extraction and commodity exports (thus less vulnerable to swings in global commodity prices) and where prosperity is broadly shared with all residents in the province.