Home › Publications › Reports & Studies › Climbing Up and Kicking Down 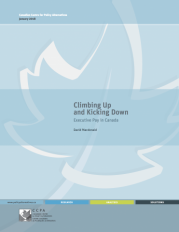 Climbing Up and Kicking Down

The eleventh in an annual series, this year's report on CEO compensation finds that, for the first time, Canada’s 100 highest paid CEOs netted 209 times more than the average worker made in 2016. Canadian CEOs are again taking home pre-2008-crisis levels of compensation, pushing the income gap between Canada’s top executives and the average worker to record highs. While the idea of a $15/hour minimum wage has faced debate across Canada, rising CEO wages have gone largely unchecked. The report shows the country’s highest 100 paid CEOs on the S&P/TSX Composite index now make, on average, $10.4 million — 209 times the average income of $49,738, up from 193 times more in 2015.

Taking a historical perspective, CEO pay is moving further away from a simple salary and toward all-out incentives. Author David Macdonald explains what this trend means for compensation amounts as well as the risks it poses to the stability of Canada's economy. Finally, this report offers policy solutions that could help rein in C-suite compensation.

A more recent version (2019) of the CEO pay report can be found here.