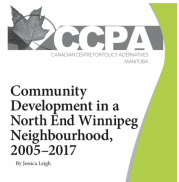 Community Development in a North End Winnipeg Neighbourhood, 2005-2017 examines community development in the Dufferin neighbourhood in Winnipeg’s North End over a period of twelve years. This paper describes how this work later played an integral role in the resurgence of Winnipeg’s Bear Clan Patrol. It describes how community development has been practiced in Dufferin during this period, including both the challenges and successes, and assesses the overall impact this has had in the community. The author, Jessie Leigh, works as the Community Development Worker with the Dufferin Residents’ Association of Winnipeg (DRAW) as well as with the Bear Clan Patrol.