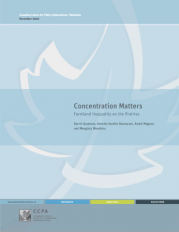 The persistent decline in the number of farmers, farm size expansion, growing farm income inequality, and increased land concentration have other effects as well. Rural economies, communities, businesses, and services are also affected as there are fewer farm families to patronize local shops and services, while farmers lose their capacity to democratically influence governments and legislation as their voting numbers fall. Meanwhile, non-farmers lose their connections to farms and rural culture as fewer and fewer urban residents count farmers among their family members or friends. A series of policy measures are urgently needed to counter the market forces that will otherwise drive us toward even more concentrated farmland ownership and drive half of Canadian farm families off the land in the next one to two generations.