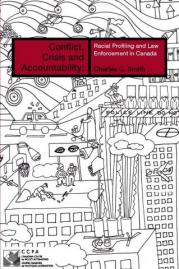 Conflict, Crisis, and Accountability focuses on racial profiling in a law enforcement context, particularly as it relates to domestic policing and anti-terrorism initiatives, and issues concerning the reality and impact on peoples of African descent and those ensnared in post 9/11 security actions.

The book is divided into five chapters. The first two summarize developments contributing to the conflict between the Toronto Police and the African Canadian community as well as the history of racial profiling and domestic law enforcement in the U.S., the U.K. and Canada. The next two look at the impact of anti-terrorism legislation, its effect on particular racialized groups and how this is part of the history of Canadian immigration law and policy. The final chapter reviews current efforts to reduce and eliminate racial profiling in domestic law enforcement; several of the measures examined might be useful for all law enforcement officials, whether domestic or at the borders of the nation.

The book is a real treasure trove of information – historical and contemporary - of the relationship between the Canadian state and Canadian racialized minorities. The author explores effectively the impact of that convergence and the use of common strategies and tools of the trade, justified by the same logic of broad brush distinctions and assumptions of proclivity to criminal behaviour based on racial and religious affiliations.

Conflict, Crisis and Accountability is essential reading about racial profiling, and is engaging, sensitive, politically astute, and well documented. It focuses on the “hostile interactions between law enforcement/security services and individuals from racialized groups,” and exposes in extensive detail the permanence of a state of crisis in the everyday reality of Aboriginal and racialized persons--a crisis only exacerbated by racial profiling. The author offers a glimmer of hope when he cites the various efforts to change the institutional values and practices of law enforcement institutions, and to influence the behaviours of individual officers.

Racial profiling contributes to mistrust, alienation and a diminished sense of citizenship and, as Ontario Chief Justice Roy McMurtry warned, threatens to undermine both the perceived and substantive equality of Canada’s Aboriginal and immigrant/ethnic communities. Now, with this comprehensive research into racial profiling, Charles C. Smith adds to the growing call for acknowledgement of the problem, along with policy initiatives to reverse this harmful trend.