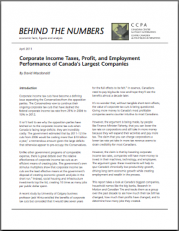 This study tracks 198 companies on the S&P/TSX composite from 2000 through 2009 and finds those companies—Canada's largest corporations—are making 50% more profit and paying 20% less tax than they did a decade ago.

However, in terms of job creation, they did not keep up with the average growth of employment in the economy as a whole. From 2005 to 2010, the number of employed Canadians rose 6% while the number of jobs created by the companies in the study grew by only 5%. In essence, the largest beneficiaries of corporate tax cuts are dragging down Canadian employment growth.

If those 198 companies paid the same tax rate as they had in 2000, federal and provincial governments would have collected an additional $12 billion/year in revenue. The loss in revenue from all Canadian corporations would be larger still.