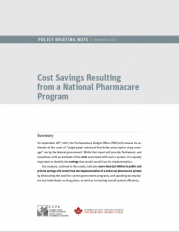 On September 28th, 2017, the Parliamentary Budget Office (PBO) will release its estimates of the costs of “single-payer universal first-dollar prescription drug coverage” run by the federal government. While that report will provide an estimate of the costs associated with such a system, it is equally important to identify the savings that would result from its implementation.

This briefing note, co-published by the CCPA and Canadian Doctors for Medicare, indicates more than $30 billion in public and private gross savings would be available for the implementation of a universal pharmacare system. The study outlines the savings and efficiencies under pharmacare, highlights additional benefits, and underscores the high costs, administrative complexity and poor coverage of Canada’s current patch-work of prescription drug plans.