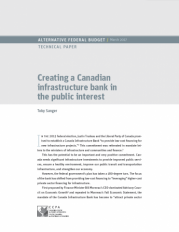 Creating a Canadian infrastructure bank in the public interest

During the 2015 federal election, the Liberals promised to establish a federal infrastructure bank to provide low-cost financing to municipalities. However, in the Fall Economic Statement, they proposed that it rely largely on private institutional finance. The federal budget, to be released on March 22, is expected to provide more details of the government's plans in this area.

This study finds that private financing of the proposed Canada Infrastructure Bank could double the cost of infrastructure projects—adding $150 billion or more in additional financing costs on the $140 billion of anticipated investments. It would amount to about $4,000 per Canadian, and about $5 billion more per year (assuming an average 30-year asset life). The higher costs would ultimately mean that less public funding would be available for public services or for additional public infrastructure investments in future years.