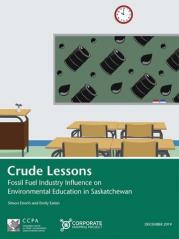 With climate and energy issues dominating much of the political debate, the question of how and what students learn about these issues in our public schools has become an increasingly contentious issue. This is especially the case in Western Canada, where recent comments by conservative politicians and pundits like Alberta Education minister Adriana LaGrange and Danielle Smith try to characterize the public-school curriculum as biased and even outright hostile to the oil and gas industry. Right-wing provocateur Ezra Levant has gone so far as to characterize public school teachers as the country’s “most powerful anti-oil lobbyists” where every “teacher’s kit in Canada whether officially coming from the leftist universities, or coming right in from environmentalist lobby groups into our schools, is anti-oil, anti-industry, anti-energy.”

In Crude Lessons: Fossil Fuel Industry Influence on Environmental Education in Saskatchewan, authors Emily Eaton and Simon Enoch examine whether conservative claims of anti-oil bias in our public schools have any validity in Saskatchewan. Through interviews with teachers, educational employees, administrators and representatives from oil-industry sponsored third-party educational organizations, the authors conclude that conservative fears of bias are entirely without merit.

The authors conclude that it is the oil and gas industry that exerts an undue influence over how climate issues are taught in our schools, promoting a type of environmental education that will ultimately leave students ill-prepared for the realities of climate change as it soft-pedals the scope and extent of changes required to adequately address this planetary-scale threat.