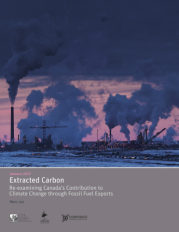 This study re-examines Canada’s contribution to global climate change in light of the Paris Agreement by looking at extracted carbon—the total amount of fossil fuels removed from Canadian soil that ends up in the atmosphere—whether used for domestic purposes or exported and combusted elsewhere.

This study is as part of the Corporate Mapping Project, a research and public engagement initiative investigating the power of the fossil fuel industry in Western Canada. The CMP is jointly led by the University of Victoria, Canadian Centre for Policy Alternatives and the Parkland Institute.

This research was supported by the Social Science and Humanities Research Council of Canada (SSHRC).