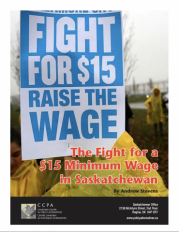 The Fight for a $15 Minimum Wage in Saskatchewan

Dr. Andrew Stevens is an Associate Professor in the Faculty of Business Administration at the University of Regina. He teaches and researches in the areas of industrial relations, sociology of work, political economy, and migrant labour. In 2014, he published Temporary Foreign Workers in Saskatchewan’s “Booming” Economy with the Saskatchewan Office of the Canadian Centre for Policy Alternatives.