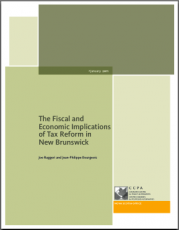 The Fiscal and Economic Implications of Tax Reform in New Brunswick

On the personal income tax side, the main change was the compression of the four-rate schedule into a two-rate system: 9% for taxable income up to $37,892 and 12% for taxable income above this level. On the business side, in addition to the reduction in the general corporate income tax rate from 13% to 8%, it offered a range of incentives to businesses.

The government’s ideologically-motivated, pro-growth justification for its tax reform package of reforms is based on the belief that income tax cuts have the power to provide a strong stimulus to the provincial economy, and thus are considered self-financing. Not only is there little to no empirical evidence to support this belief and key objective of the tax reform package, there is significant evidence to counter this contention and other claims about the impact of these tax reforms.