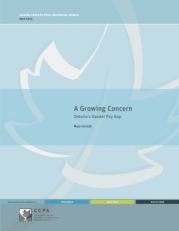 (1) the pay gap between men and women in Ontario and,

(2) the date in the calendar year that demarcates how much longer women have to work to earn the amount that men earn in a year. This year's report examines whether there has been any change in the pay gap and denotes a troubling development.

This report not only documents the worsening gender pay gap in Ontario, it scouts a range of municipal, provincial, national and international best practises to guide policy makers intent on narrowing the gap. There are plenty of options at hand. This report offers a 10-point plan to get us there.