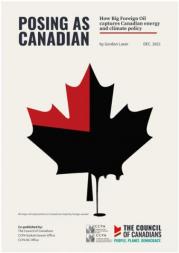 This is the first instalment in a series of excerpts from Gordon Laxer's new report, "Posing as Canadian: How Big Foreign Oil captures energy and climate policy" — co-published by the Council of Canadians, CCPA BC, and CCPA Saskatchewan

Tasked with investigating the vast sums that allegedly flowed from U.S. foundations to Canadian environmental groups, inquiry commissioner Steve Allan followed the trail of money and found a pittance. Allan’s report identified between $2.21 to $3.46 million a year in “foreign funding directed to Alberta resource development opposition” – a drop in the bucket for the dozens of groups concerned.

If, as Alberta Energy Minister Sonya Savage stated, the aim of the inquiry was to expose the influence of foreign actors over domestic policy, it missed the mark badly. Right under its nose was a far larger source of outside money influencing Albertan and Canadian politics: Big Foreign Oil.

Oil corporations in Alberta and Canada are overwhelmingly foreign-owned. This report examines how Big Foreign Oil hinders climate action in Canada by capturing and controlling the lion’s share of the industry, policy-making, and profits.