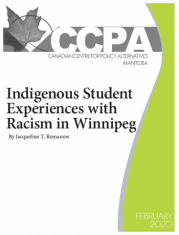 While racism in the United States receives a great deal of media attention, in Canada it is less so. Canadians like to see themselves — and are generally seen by nationals of other countries — as tolerant, multicultural and open minded, believing that all the people of the nation enjoy equal opportunities and cultural freedoms (Mackey,
2005, p. 15–6; Simpson et al., 2011, p. 287). The accuracy of this narrative, however, is belied by the reality on the ground (Clark et al., 2014, p.113). Although this state-sanctioned multiculturalism narrative remains dominant in mainstream perception, persistent disparities in living standards — along with bleak social and economic prospects — tell a different story for Indigenous people in Canada (MacDonald, 2014, p. 66).