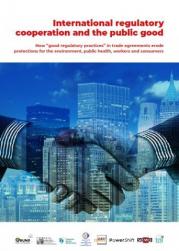 This report, which is published with PowerShift e.V., examines the threat to precautionary environmental, consumer, public health and labour policy arising from regulatory co-operation and "good regulatory practices" (GRP) chapters within the Canada-EU Comprehensive Economic and Trade Agreement (CETA), the Canada-U.S.-Mexico Agreement (CUSMA or USMCA), and the rebooted U.S.-EU negotiations toward a transatlantic free trade deal.

While, in principle, international regulatory co-operation has the potential to raise standards, the report argues that the terms under which this co-operation takes place, and the ideology behind the GRP agenda, will increase corporate influence at the expense of public protections.

The report examines several examples of GRP-based co-operation between Canada and the U.S. that produced sub-optimal results from a public interest perspective. It then assesses corporate priorities for deregulation, in particular related to food safety and genetically modified crops, pesticides, and the management of toxic chemicals, within CETA's many bilateral regulatory co-operation working groups. Finally, the report recommends ways that international regulatory co-operation could be put on more democratic, transparent and accountable foundations.