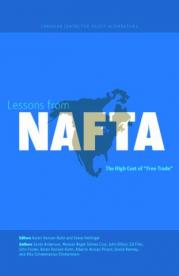 The corporate and political advocates of the North American Free Trade Agreement (NAFTA) continue to defend this trade deal and even to claim that its effects on the workers and consumers of all three countries--Canada, the United States, and Mexico--have been enormously beneficial.

In fact, the impact of NAFTA on most of the people in all three countries has been devastating. The agreement has destroyed more jobs than it has created, depressed wages, worsened poverty and inequality, eroded social programs, undermined democracy, enfeebled governments, and greatly increased the rights and power of corporations, investors, and property holders.

NAFTA has also been used to weaken Canada's sovereignty and promote its economic assimilation by the United States. It has led to greater pressure on Canada and Mexico to conform to U.S. foreign policy objectives. Most alarmingly, the three governments are bent on extending this failed model to other countries in Central and South America and the Caribbean in the proposed Free Trade Area of the Americas (FTAA). Before leaping into that abyss, citizens and policy-makers throughout the hemisphere should stop and look at the concrete results of this trilateral trade agreement.

On NAFTA's 10th anniversary, researchers based in all three countries have assessed the agreement's consequences and found them to be overwhelmingly negative. Their findings are presented in the following summary of their longer studies.