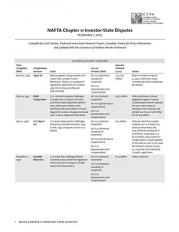 This study documents the 77 known NAFTA investor-state dispute settlement (ISDS) claims up to January 1 2015. These include 35 against Canada, 20 against the U.S., and 22 against Mexico. Canada has paid out NAFTA damages totaling over $CAD172 million, while Mexico has paid damages of $US204 million. The U.S. has yet to lose a NAFTA chapter 11 case. All three governments have incurred tens of millions of dollars in legal costs to defend themselves against investor claims.

The accompanying analysis, Democracy Under Challenge: Canada and Two Decades of NAFTA's Investor-State Dispute Settlement Mechanism, explores why Canada has been sued more times than either Mexico or the U.S. under NAFTA and why this problem is getting worse.

Canada has been the target of over 70% of all NAFTA claims since 2005. Currently, Canada faces nine active claims challenging a wide range of government measures that allegedly interfere with the expected profitability of foreign investments. Foreign investors are seeking over $6 billion in damages from the Canadian government. These include challenges to a ban on fracking by the Quebec provincial government and a decision by a Canadian federal court to invalidate a pharmaceutical patent on the basis that it was not sufficiently innovative or useful.

The pervasive threat of investor-state challenge under NAFTA chapter 11 puts a chill on public interest regulation. Current trends will only worsen unless political and legal action is taken.