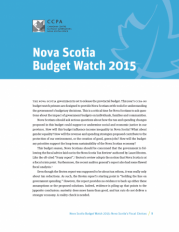 In the lead-up to the release of the Nova Scotia provincial budget, the CCPA-NS has published a series of 'budget watch' primers to help Nova Scotians better understand the government’s budgetary decisions. When the budget is released, it is important to ask questions about the government budget’s impact on us, our families and our communities. The primers are designed to provide Nova Scotians with the information necessary to weigh the choices made by our government.

Nova Scotia Budget Watch 2015: Through a Gender Lenswas produced in partnership with the Women’s Action Alliance for Change Nova Scotia(WAACNS).