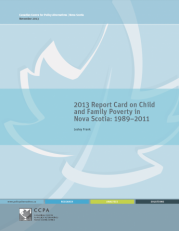 Since 1999, Nova Scotia Child Poverty Report Cards have recorded changes in child poverty rates to track progress on the government of Canada’s 1989 promise to end child poverty by the year 2000. This year’s report card examines the period 1989 to 2011 (the year for which the most recent data is available), and uncovers some troubling trends: child poverty rates are still higher for children under six, and for children living in female lone-parent families. The data also reveal that it is increasingly the case that many families with children are not able to rise out of poverty despite securing full time/full year employment. The report card does show that government income support has prevented some families with children from falling into poverty. However, the data shows that there is much more that can be and must be done.