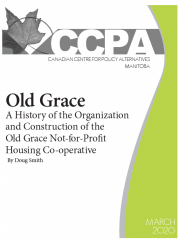 In June 2019, Old Grace Not-for-Profit Housing Co-operative (OGHC) held its grand opening. The first members of the 64-unit co-op in Winnipeg’s downtown Wolseley neighbourhood had moved in a little more than a year before, and the opening
was the culmination of seven years of work.

The co-op was one of five non-profit housing co-operatives that opened in Manitoba in the last decade. The opening of these five co-operatives marks a revival the development of nonprofit co-operative housing in Manitoba, which had been, with a couple of small-scale but heroic exceptions, dormant since 1993, when the federal government ended its commitment to social housing in general.  Read full report above.