Home › Publications › Reports & Studies › A Poverty Reduction Plan for BC 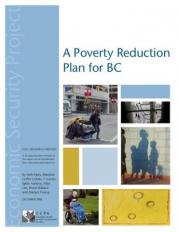 A Poverty Reduction Plan for BC

This report lays out a comprehensive poverty reduction plan for BC.

In 2009, after the report was published, the CCPA-BC, along with other organizations, founded the BC Poverty Reduction Coalition, a province-wide group calling for a poverty reduction plan for BC with legislated targets and timelines. The Coalition works to make sure that all BC political parties get the message that British Columbians want action on poverty, and that not only is this the right thing to do, it also is the most effective way to make this province better for everyone. For more information on the BC Poverty Reduction campaign and other ways to get involved, visit http://bcpovertyreduction.ca.