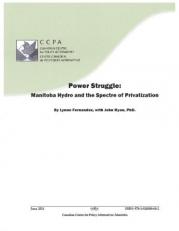 For the past 40 years political leaders — supported by the majority of professional economists in the academy and private sector — have reduced the role government plays and increased the degree of competitiveness in the economy. The number of public-sector enterprises that have been sold off (such as Manitoba Telephone Services, Petro Canada and Air Canada), and the increasing willingness of governments to downsize the public sector and deregulate key sectors of the economy (e.g., transportation, energy, telecommunications), are testimonies to this shift in governance.

The rationale for this sea change is found in a particular and popular economic theory called neo-liberalism, or free market (also referred to as neo-conservative) ideology. Under free-market philosophy, a private competitive market will allocate resourcesmore efficiently than a government-regulated market. It doubts the ability of the welfare state to improve the lot of society because the government is thought to be protected from the rigours of competition, which is needed to make enterprises efficient. Lack of competition is assumed to cause government enterprises to become bloated and complacent.

Public enterprises, such as Crown corporations, have long been in the crosshairs of freemarket proponents. Chapter 15 in The North American Free Trade Agreement (NAFTA) constrains Canada’s Crown corporations and The Comprehensive Economic Trade Agreement (CETA), being negotiated between Canada and the European Union, threatens to quash Crown corporations’ procurement powers. BC Hydro, a Crown corporation very similar to Manitoba Hydro, is in the process of been carved up, and its purpose and activities being radically changed as it slowly gets integrated into the deregulated U.S. electricity market. There is every reason to suspect that Manitoba Hydro is on several hit lists for privatization.

This report explores the flaws in the freemarket argument and gives examples of how Manitoba Hydro belies the predictions of economic theory.