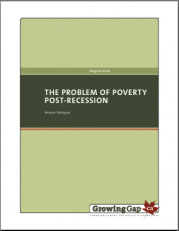 The Problem of Poverty Post-Recession

Every recession ushers in a rising tide of poverty. As jobless and underemployed
people struggle to make ends meet, the nouveau poor swell the ranks of the déjà poor.

The most recent statistical update on incomes in Canada was released in June,
telling us that in 2008, as the nation headed into a brutal recession, there were just
over 3 million Canadians living in poverty in this country using the standard meas-
ure, Statistic Canada’s after-tax low-income cut-off (LICO).

Statistics on annual income data come in two years after the fact and much has
happened in this country since 2008. But if past recessions are any guide, between
750,000 and 1.8 million more Canadians will be counted as poor before recovery is
complete. More than one in seven Canadians may have tumbled into poverty before
this is over. Many of them will be working.

The greatest increase in poverty will be among working age adults (18 to 64 years of age) and they will pull along hundreds of thousands of children who live with them.

For the first time in decades, we may also see a sobering increase in the number of
seniors coping with low income, a phenomenon which did not occur in previous
recessions but has already reared its head in these new numbers.