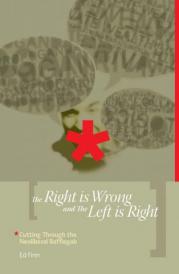 The Right is Wrong and The Left is Right

For the past 14 years, as editor of The CCPA Monitor, the monthly journal of the Canadian Centre for Policy Alternatives, Ed Finn has been analyzing, exposing, and debunking the doctrine of neoliberalism. This is the ideology used to justify the overwhelming power that corporations have seized or been granted over the past three decades—power that has been harnessed to gain economic and political dominance on a global scale.

This is the third collection of columns, editorials and essay Ed Finn has compiled since the early 1990s. As in the first two—Under Corporate Rule and Who Do We Try To Rescue Today?—the pieces in The Right is Wrong and The Left is Right cover a broad range of interconnected issues. The titles of the main parts of the book speak for themselves: Truth or Propaganda?, Democracy or Plutocracy?, Equality or Inequality?, Public Health or Private Wealth?, Free Trade or Fair Trade?, and Ecological Collapse or Global Renewal?.

This is an anthology that anyone concerned about the problems of the present or prospects for the future will find informative and provocative. You may not agree with all of Finn's views—it would be surprising if you did—but you will almost certainly find them stimulating, clearly written, and well worth pondering.