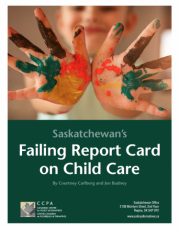 Canada ranks very poorly among peer nations for overall quality and rates of access to regulated child care, with Saskatchewan ranking the lowest of all Canadian provinces. This study examines the history and consequences of the province's neglect in the important area of child care.

All Saskatchewan families struggle under the current child care paradigm, but those most negatively affected include families living in rural and remote areas; Indigenous families; single parents; parents who do shift, contract or seasonal work; and low income families generally. Yet, the authors note, governments of every political stripe have assumed that child care is primarily a matter of private family responsibility, a problem to be resolved by the market.

Demand-side subsidies have been provided only to low income parents in Saskatchewan, based on the notion that middle class children and children who are disadvantaged have fundamentally different developmental needs. Furthermore, the income threshold for receiving provincial child care subsidies has been frozen since the 1980s and was, even then, much lower than Canada Assistance Plan guidelines recommend. As a result, many families are considered too "rich" for assistance even if they fall below the poverty line.

The study makes several policy recommendations for improving and properly funding child care in Saskatchewan with a focus on providing appropriate spaces staffed by qualified and properly remunerated educators and caregivers. The authors further argue the need to expand the child care policy debate beyond economic issues, such as increasing female labour force participation, so that we are also considering the challenges of creating equitable learning and development opportunities for young children as part of an effort to equalize long-term opportunities and life outcomes for all Saskatchewan residents.

Courtney Carlberg recently graduated with her masters of arts in sociology from the University of Saskatchewan. She works part time as research co-ordinator in the College of Nursing and serves as Treasurer for the Spadina Early Learning and Childcare Co-operative in Saskatoon.

Jen Budney is a postdoctoral fellow at the Centre for the Study of Co-operatives at the University of Saskatchewan. She is also Chair of the Board of the Spadina Early Learning and Childcare Co-operative, Saskatoon's oldest licensed child care centre with four locations serving the city's central neighbourhoods.