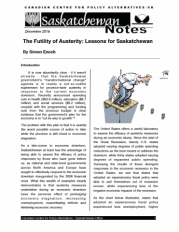 SaskNotes: The Futility of Austerity

The instinct of governments across the political spectrum when faced with economic contraction has been to cut public spending as a means to reduce deficits and restore growth. This instinct for austerity is certainly shared by the Saskatchewan government, which has recently announced large spending cuts in health ($63.9 million), education ($8.7 million) and social services ($9.2 million). This is in addition to funding and program cuts announced in the 2016 budget which saw cuts to Seniors and Children’s Drug Plans, reduced funding for the Alternative Measures and Aboriginal Courtworker Program, elimination of funds for urban parks and claw-backs to some social assistance programs.

Unfortunately, this instinct to cut during an economic downturn is exactly the worst possible course of action to take while the province is still mired in economic stagnation. As this SaskNotes demonstrates, rather than restoring growth, austerity in a time of economic downturn will have the the perverse effect of prolonging economic stagnation, increasing unemployment, exacerbating deficits and hindering economic recovery.